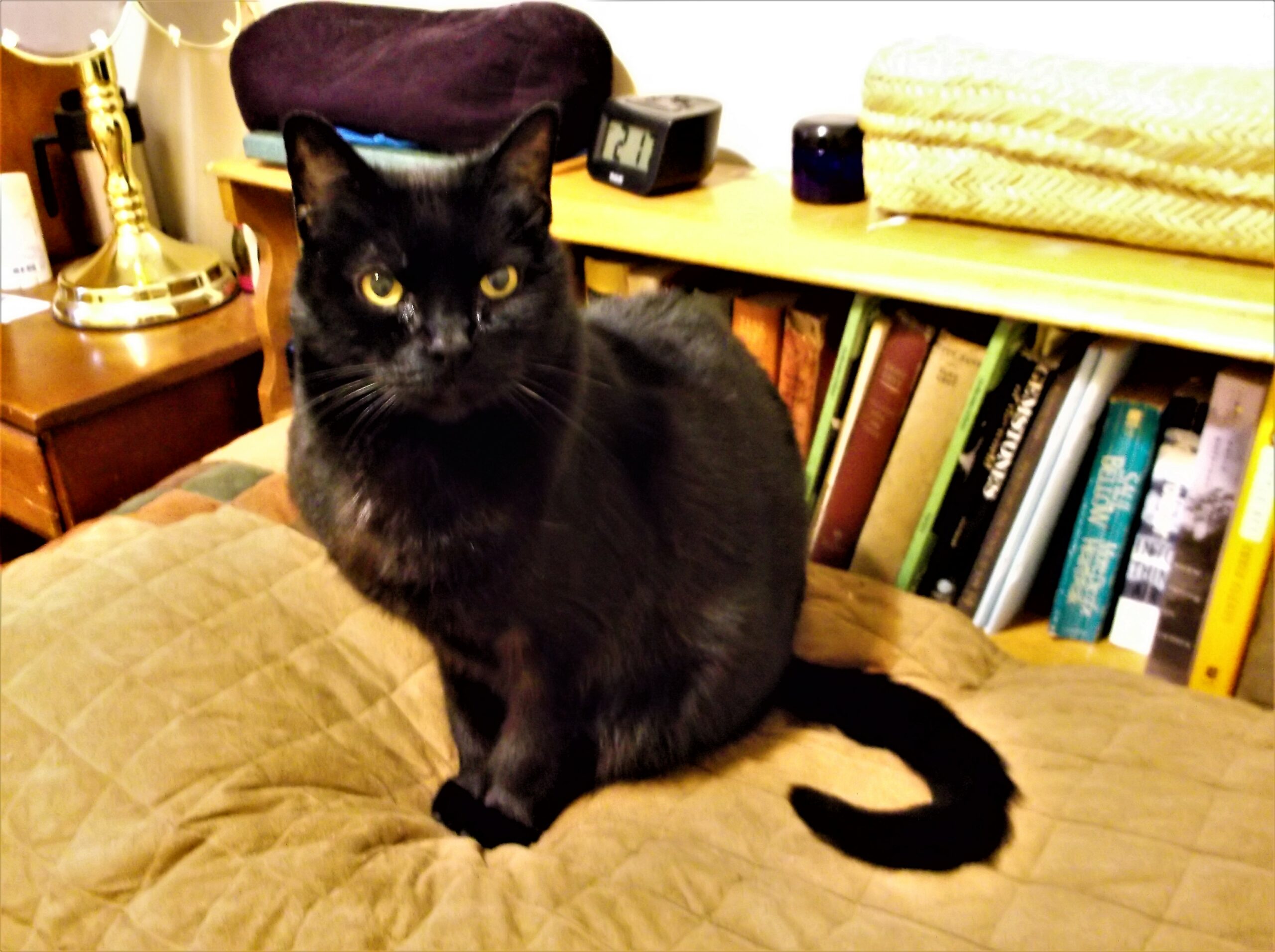 If you’d like to read along while you watch this little video, feel free to do so. That way you won’t miss a single word.

Hi, there!  It’s your cantankerous cat lady, Fran.  For my other website, https://build2winaffiliates.com, I am learning to make screencast videos.  I decided to practice by making a little album of some of the cats who have owned me.  I’ve had a life filled with cats, so this is by no means the complete collection.  It’s all I can find in my photos at present.

When I first moved to Kodiak, one day when I was at work at Kodiak Oil Sales, my husband, Les, came in to show me two black kittens.  He’d decided we needed a cat, but didn’t have the heart to separate the two brother kittens, so he brought them both home.

A friend occupied the spare bedroom in our house.  He’s the one who named the cats, with monikers that described their personalities.  He named one “Uptight Cat” and one “Loose Cat.”

They appear now and then in this blog.  To read a complete story about them, go to “Cats That Make You Laugh Can Help Your Health.”

When I moved to Spruce Island to stay, I had no cat.  The people who lived on the beach over the hill had a mama cat who conveniently had kittens.  I picked one – a feisty little black kitten.  I named him “Sam,” a traditional black-cat name in my family.

He grew up to be a fine cat.  You can read about him in “Friends Are Family You Choose For Yourself” and “The Cat Raised The Dog On My Alaska Homestead.”

A project foreman’s wife in the village of Ouzinkie fed a stray cat with kittens.  When the foreman’s job finished, they moved away.  I captured two of the kittens and took them home.

You can read about them in the post titled “Have You Ever Tried Domesticating A Feral Cat?”  I named them Poo an’ Lou, the nicknames of my  two black Kodiak brothers, Uptight Cat and Loose Cat.  The two little cats lived out their lives on Spruce Island.

Once all my cats were gone, I wasn’t sure I wanted another cat.  It’s always hard losing them.  Then, the nuns who lived at the end of the island asked me if I’d take one of their cats.

She’d been given to them by friends.  A Siamese female, she had the breed’s habit of talking a great deal.  She was a sweet, lovely cat, but they said she liked to disrupt services in their little chapel.

She did somersaults down the aisle, making it very hard for the nuns to concentrate on the service.

So, I added her to my household.  She became my transition cat.  When I moved back to Kodiak, she went along, and lived in Bell’s Flats with me for a few years.

When Maxine crossed the Rainbow Bridge, I needed time to grieve, and got involved in a project, building a retaining wall of tires against the river bank, against a large cottonwood that threatened to fall over the edge.  When we completed the project, I decided to get another cat.

Carlos was two when I got him at the shelter, and we were together for 12 years.  Carlos was the epitome of catness, and I loved him dearly.  When he died, I wrote a book about all his crazy antics.  You can order it on this site.  Go to the post titled “Have You Found Your Purrfect Pet Companion?”

I thought Carlos would be my last cat, but then I learned that Pogo, a cat I’d know for a long time had ended up in the animal shelter.  He was 14 years old.  I went to see him.  He’d been in there over seven months and had some serious health problems.

Being a very timid cat, he was freaked out by the place.  The dogs at the far end of the building never shut up.  The cat was always frightened and had no place to hide.

He was so stressed he’d pulled all the hair off his stomach and in lines down his legs.  The fur was gone from his ears – they looked like parchment.  He was overweight and arthritic.  When I got him home, I found he snored loudly.  He limped – he wouldn’t run – he wouldn’t play – he had bad teeth and renal disease.

I felt compelled to bring him home.  He was so grateful that the first day, he followed me everywhere and never stopped purring.  Now, a combination of a good medicated diet, lots of love, and CBD oil has done marvels.  He runs, he plays, he doesn’t limp, his fur has all grown back, and he’s a happy cat.

I just wrote a post about Pogo.  It’s called “I Love Cats – Can You Tell?”

Cats are wonderful companions – a force for good, in my eyes.  I believe my world is a better place because I have shared it with cats.