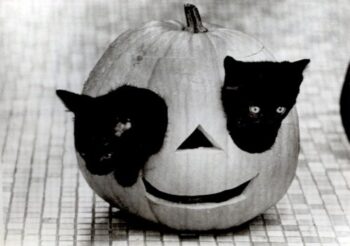 With Halloween fast approaching, we think it a good time to learn all about black cats. How did they become associated with Halloween? Are they always considered bad luck, or are there two sides to that story?

The Early Christian Church Started It All

Black cats became linked to the occult as far back as the 13th century. At that time, an official written document called “Vox in Rama” was issued by Pope Gregory IX in 1233.

In it, cats received the reputation of being an incarnation of Satan, and as a result, the Inquisition began. During this time, the church hunted, persecuted, tortured and killed witches and their cats in vast numbers. Often, cats alone were hunted down and destroyed, due to this false belief.

At some point, the purge of witches with cats narrowed to black cats. The masses believed the witch could turn into their “familiar,” the cat, and this belief led to mass killings. The poor innocent black cat earned the reputation of having a direct link to the devil.

During the middle ages, ignorant people even blamed cats for the spreading of the Bubonic plague, thus adding another reason for killing them. They did not understand that if they had not killed all the cats, the plague could have been prevented. Those cats would have made short work of the rats.

Since medieval Europeans believed that the devil and witches could take the form of a black cat, it makes sense that people might see a black crossing their path as bad luck — It could be the devil in disguise.

So, we know that in the dark ages of history, cats posed a threat to the early Christian church. Because the church paired cats with the devil, it took centuries for this ignorance and superstition to lose favor.

I’m Really Glad To Live In The Present

It’s a good thing I didn’t live in the Middle Ages. I love black cats, and have been owned by several of them. Because cats and women accused of witchcraft both tended to have a healthy disrespect for authority, the church saw them as threats. The church would tolerate neither independent women nor independent animals. My cat and I probably would have been burned at the stake.

I am so glad these attitudes have changed.

In other parts of the world, you will find many beliefs that consider the black cat the bearer of good luck. Take a look at some of these, to become reassured that your black cat brings good fortune, not bad. If you take a little world tour, you will find that more cultures believe black cats to be lucky than those believing them evil.

Of course, we know that in ancient Egypt, the cat became elevated to god/goddess status. Egyptians held the black cat in high regard because of the resemblance between the cat and Bastet. She was the black cat-headed goddess, bringing good luck in fertility and disease control.

As for modern times in Japan, the people there love cats, and have a few positive myths 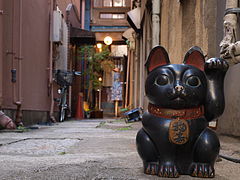 about black cats in particular. One, involving good fortune and protection, is the maneki-neko (beckoning cat). If you keep a black maneki-neko in your yard it will protect you from harm of all kinds.

However, those ancient people, now long-gone, came well before the church declared that cats had a pact with the devil. What about beliefs that still continue today?

The English have a belief that giving a black cat to a bride on her wedding day will make her marriage a good one and will bring her luck. A black cat in the home signifies a long, happy life together. The black cat has the job of warding off evil spirits. In fact, in much of the UK, a black cat is said to bring good luck.

Remember Freya, the Norse goddess of love, fertility, and beauty? She rides on a chariot pulled by two large black cats. Farmers would leave bowls of milk for her “cat team” and in return Freya would bless them with a good harvest.

In many cultures, people of the theatre believe that a black cat provides an excellent audience member. If a black cat visits the theatre on opening night, the play will have a long, prosperous run.

A Black Cat Can Find You Treasure

In France, peasants believed for a long time that a black cat could lead to good luck as well as wealth. If the cat was released at a crossroads where five roads intersected, it would lead the person to treasure.

It makes you wonder, how such a belief developed. Did a black cat actually lead its person to treasure, and that started the story?

In the South of France they called black cats “matagots.” The cat became known as a “magician cat” or a “money cat.” Treat the cat well and with respect. Give it the first bite of dinner, and provide kitty with a nice bed. The matagot will reward you with wealth and good luck.

Back in the old sailing days, a black cat on a ship brought good luck. Not only that, but if a black cat rode in the ship for the whole voyage, the boat would return safely home from the seas.

Do keep your black kitty safe at home on Halloween, just in case you run across some crazy folks out there. Cherish your black cat, as he deserves it — he can enrich your home and your life, protect you from evil spirits, and bring you luck and wealth.

What isn’t to like? Let’s hear it for black cats!