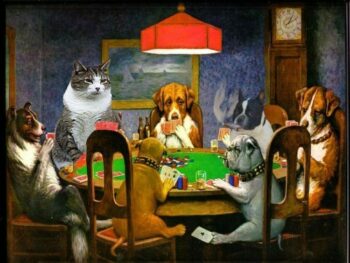 Cats need to play, especially if they must stay indoors. Playing with your cat will keep kitty boredom away, and can provide mental stimulus for kitty. So, make sure you learn how to entertain your cat.

Why do cats need to play? In the wild, your docile animal would become a predator in order to find food. The instinct to hunt is hard-wired into the kitty brain. Whether hunting becomes a necessity or just offers pleasure, the cat must act on his instinct.

If no actual prey is available, the cat will use imagination to turn a game into the real thing. When you play with him, for example, with a wand toy, try to mimic kitty’s imaginary hunt by making the “target” on the wand move and act as much like prey as possible.

His imagination becomes a very important factor of any play-time activity, because the cat can

“pretend” he goes on a real hunt. Yes, he certainly does have imagination, and can turn a game into a most satisfying activity.

So, the cat does have an imagination. How about you? Are your imagining skills up to par? Do you remember how to play? When you were a child, you could imagine all sorts of fantasy situations. Now, see if you can use your imagination skills to make your cat happy.

By the way, an added perk to entertaining kitty is that it will strengthen the bond between you. That can be considered a good thing.

Here you will find instructions for making some games especially for you and kitty.

Use a small box, such as a Kleenex box or a shoe box.

Collect toilet paper and paper towel tubes. Cut them into varying lengths, and put in the box until the box fills up and the tubes do not wiggle around.

Put some cat treats in some of the tubes.

Another way to make an effective toy with toilet paper tubes: Fasten several of them in a line to represent a snake. Of course, you will need a string through them so you can move he whole snake along.

Put treats in the tubes, so the cat can smell them and fish them out. Pull the snake along the floor, and enjoy this simple kitty game.

Get a large cardboard box and cut holes of different sizes in each side of the box.

Drop cat toys such as balls into the box. Mocha’s spring toys would work well here.

Tape the box closed, and give to your cat. You might make the holes in the box different sizes, so they will prove big enough for the removal of some of the toys, but not all of them.

Make Your Own Treat Dispenser

Here’s an easy way to create a toy that will dispense kibble.

You’ll need a plastic water or soda bottle. Cut a few holes in the bottle, large enough so the treats will come through.

Make sure there are no sharp edges on the holes. Now, put some kibble inside and screw on the lid.

Give the bottle to kitty. Shake it first so a few of the treats come out. Kitty will get the idea.

Large grocery bags seem to be a standard for cat entertainment. Open it up and put it on the floor with a couple of toys inside. Remove the handles, so kitty doesn’t get tangled up in them.

Mocha and I already learned this one the hard way. He became quite interested in playing with a paper bag until the handle went around his head. I had to catch him to remove it, and took the handles off immediately.

Loose Cat had a special fascination with paper bags. He liked to sleep in a big easy chair in the living room. If you opened a big bag and set it upright at the edge of the chair, the cat would stare and stare into it until eventually he just slid forward into the bag.

Then the bag would fall over on its side, cat still within; then Loose Cat would go to sleep in the bag.

A wand toy can become one of the best ways to play with your cat, because the game will provide physical exercise, the emotional satisfaction of a simulated hunt, and mental stimulation.

Work on making that toy on the end of the wand mimic the action of prey. Make it look real — and, guess what? You will receive the advantage of being far enough away to avoid teeth and claws.

A couple of hints: At first, get the cat to watch the toy more, before it pounces and chases. Remember that a cat’s prey doesn’t typically run up to the cat, so be a bit more real here.

Also, now and then, let the cat “capture” the toy, allowing him some success in his “hunt.” Mimic the way prey would move across and away from the cat’s visual field. Don’t just dangle the toy in the cat’s face

Such games help your cat because he must use his brain to go through the motions of the hunt: stalking, planning, and pouncing.

Try this to enhance wand action: Go in one room and drape the string of the wand toy around the corner of the doorway. The cat will see the toy but not you. No, move the wand toy so the “target” moves. Kitty may just find it irresistible.

Remember the fun you had blowing bubbles when you were a kid? Well, cats can enjoy bubbles too. Be sure to get non-toxic bubbles and do not blow in kitty’s face, The cat will enjoy trying to catch them.

To take the bubble game one step further, you can buy catnip-flavored bubbles online. These can add a touch of extra pleasure to the game.

Cut To The Chase

Sometimes the cat will look back at you while moving away. They might want to play the chase game. Sometimes I will crouch down and move toward the cat, and if he wants to play, he will run.

I chase him into the next room, then turn and run the other way. The cat will then chase me.

The first time I tried this game, it surprised me when the cat actually chased me. What fun!

Do pay attention to kitty’s body language. If the tail is up, he’s having a good time. A down tail might mean the cat is a bit afraid. Reassurance is in order.

If you have plenty of empty cardboard boxes, link them together and create different passageways to form a maze.

Perhaps you can use these boxes to establish a hide-and-seek game.

Empty cardboard boxes lend themselves to all sorts of play possibilities for kitty. Use your imagination.

Teach Them To Fetch

A cat can learn to fetch, just like a dog. Find a toy that the cat likes to carry around in his mouth, and throw it across the room while the cat watches. Give a treat when kitty goes to the toy and perhaps sniffs it.

Then wait until the cat picks up the toy. This signals time for another treat.

Be sure to use the word “fetch” when you toss the toy. Eventually kitty will learn to fetch on command. For more complete instructions, read this post on teaching a cat to fetch.

A tennis ball is lightweight and thus won’t damage house or cat. It’s also near the size of your cat’s paw.

Try either throwing it up steps or letting it bounce down so the cat can become interested in the action. It shouldn’t take long for the cat to become involved with chasing it.

If you want to buy a ready-made puzzle toy for dispensing food, you will find several types available, from very simple to quite complicated. You might even select two different types, to give your kitty a couple of choices to develop his skills.

Why Games For Cats Have Value

Playing teaches the cat many things. From their kitten days, play teaches them to coordinate movements or jumping and tumbling. Play gives a chance to practice hunting skills.

You can learn cat language by observing the cat’s reactions. The cat has a chance to test his physical capabilities. Also, he gets some practice at problem-solving, which helps develop intelligence.

Play helps form bonds of affection with family members, as well as with other animal members of the family. Of course, the movement will give your cat needed exercise.

For an inside cat, play is especially important, so they have a chance to satisfy their natural instincts. With an indoor cat, play with him for 10-15 minutes at a time a few times a day.

Such activity will help keep kitty happy and healthy, and will also strengthen the bond between you.