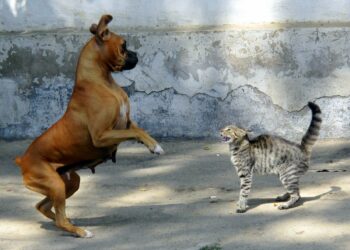 Do your cats exhibit strange behavior from time to time that makes you think he is angry about something? If he displays anger at another cat or a dog, you can decipher this behavior pretty easily. But what about humans? Do cats get made at you?

A cat’s “hard-wiring” governs his behavior in certain ways. For example, cats do not hold grudges or seek revenge. Those behaviors come from humans; however, a cat’s brain does not work that way. They do not have sufficient sophistication to plot a way to retaliate if you displease them.

However, consider the cat’s brain. It is smaller than a human brain, of course, but both the cat brain and the human’s have a center for emotions. Therefore, one emotion a cat can feel is anger. Though he may not plot revenge, he may become mad at you over something he feels is wrong.

Causes for anger can include things like feeling neglected, not receiving meals at the proper time, disliking noises or smells, or being left alone.

Here Are Specific Reasons A Cat May Be Angry

1) Perhaps you have a shy cat. Or, he might be in a mood for some privacy. Maybe he has found the perfect place to snooze, and you wake him up and bring him in to “show off” for guests.

Come on! Put yourself in his place — if you had found the perfect napping spot and became deeply involved in a good dream, how would you feel if your housemate came in and forced you to wake up and come socialize. You might end up a bit disgruntled your own self.

Don’t try to force your cat to get along with a stranger, but let him have his bit of privacy.

2) Cats don’t care for change. Your cat wants to know that his routine will remain the same every day. If he becomes used to spending a certain amount of time each day interacting with you, he may well show his unhappiness if that changes. 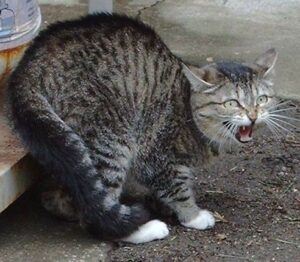 After all, the cat wants to be in charge of the place, so he likes it when everything goes his way. A change in his regular routine can make him stressed and furious. Though he may not vocalize this stress, notice his behavior, and you may see subtle changes.

3) Keeping a cat indoors when he wants out. Cats get bored if you do not provide them with sufficient stimulation, so they need something to boost their mood. Do you walk them on a leash? Take a short walk with Kitty, as it could do wonders to change his mood.

My Pogo, once he gets up in the morning, starts yelling at me to get out of bed — not to feed him, but to let him outside in the fenced yard. He has to have his morning constitutional — a walk around the yard to munch on fresh grass. Then he comes in, ready for breakfast.

Carlos could not handle staying inside. He let me know from the very first that he expected outside time. So, I would let him out after his breakfast and expect him in at 4:00 for supper. Then he stayed inside for the night.

He would have made sure to drive me insane if I had not let him go outside.

4) Your cat may feel jealousy. If you give more time to other pets, your kitty may become quite furious and will do some things to get your attention. 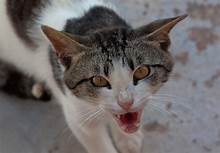 Don’t ignore this behavior, but pick up the cat or give him some extra pats and scratches so he doesn’t feel neglected.

5) Cats can get annoyed when you pick them up. Does your cat like to be picked up, or is he one of those cats who doesn’t like it? Know your cat. Some cats love snuggling and hugging, and some do not.

6) Cats can get mad if your ignore them. If you always ignore your cat, he will become withdrawn and unresponsive. Or perhaps he can become anxious, sad, or depressed if he feels you are not giving him enough attention.

If your cat is used to interaction and you withdraw, the cat may get angry with you. Reactions depend on the cat.

7) Mama cat may not want you to touch her kittens. A normal reaction of the mama cat could be anger if you try to touch her babies. Unless you have a strong bond with Mama Cat, she may not appreciate your handling her kittens. In fact, she might even attack you.

It’s best to leave kittens alone until they have grown up a bit. Then Mama won’t act with aggression if you want to touch them.

8) The cat becomes upset because you leave. If you leave for a time, your cat may get mad at you because he wants your company. Leaving the cat behind can produce separation anxiety and stress. Some cats have a strong fear of abandonment. 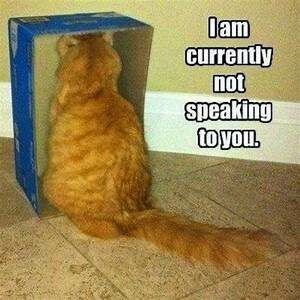 Thus, when you finally return, the cat may wish to show his annoyance at your absence. One sign of this displeasure: He will turn his back to you, and may ignore you for a while.

How Can You Tell If Your Cat Is Mad At You?

Obvious signs: Is the tail wagging very fast? Is Kitty growling? If so, your cat is royally pissed off. Don’t let this anger go on for too long. Approach the cat, pet him, talk to him sweetly, and try to coax him out of his bad mood.

You will quite possibly make Kitty even more angry. Punishing him will hurt his feelings even more, and could extend the kitty’s anger for a longer time.

Does The Cat Have An Injury Or Sickness?

Sometimes when the cat does not respond to your overtures of friendship, but remains angry, the animal may have a physical problem. An exam from the vet can ensure that the cat has no physical illness or injury.

Signs Of An Angry Cat

If your cat avoids you when she’s normally friendly, she may be mad, scared, or anxious. If she exhibits such behavior, give her space until she gets over it.

Has your cat ever growled at you? Back off; try a treat; a toy; a little grooming. Speak softly, as loud 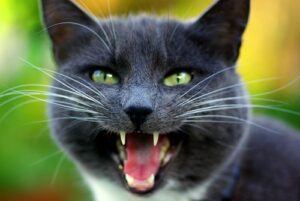 noises can frighten a cat.

Then there’s “the look.” Pogo has one of these. He gets an expression on his face that says, “You and what army are going to make me do that?”

If you are going on a trip, the cat can get upset. Does he give obvious signs of his displeasure? Perhaps he glares at you or gives you a kitty scowl.

Leave a garment that smells like you in kitty’s bed, and ask your pet-sitter to give extra attention.

How Do You Deal With A Hiding Cat?

Does kitty hide somewhere and refuse to emerge? This behavior can be one of the first signs that you have a frightened or unhappy cat.

When I first brought Pogo home from the shelter, he only felt secure under the bed. It took me three weeks to persuade him to sleep on the bed with me at night, not under it.

Now, if something or someone frightens him, he retreats under the bed. Once he’s ready, he will come out on his own.

Here’s an interesting one: What about the cat who poops or pees on your pillow? Doing so is a typical sign of separation anxiety. Though you might think a cat has decided on this way to take out her frustrations on you, she actually uses her own scent as a way to cope with her anxiety.

The cat targets the bed because it smells strongly of you, and the cat has bonded with you. Do not punish the cat because she just feels it an effective way to cope with her anxiety.

What about peeing on the clean laundry? Again, an angry cat will most often urinate on soft surfaces like laundry, the sofa, or your bed.

You may need to talk to your vet if you need help in stopping inappropriate elimination.

Each Cat Is Different 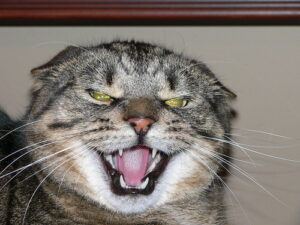 However, a cat does not have the right mental connections to be able to plot revenge or to indulge in an act of retaliation. He behaves according to what his cat mind sees as a suitable reaction.

Remember that if you have a mad cat, use some positive method of dealing with his mood. Don’t punish him. The best solution may be to ignore him until he gets over it or perhaps to distract him with a treat, play, or positive actions.

Just know that if you can help him cope with his feelings instead of adopting an attitude or behavior toward him that makes matters worse, he will soon recover from his rage. Keep in mind that love works better than punishment.