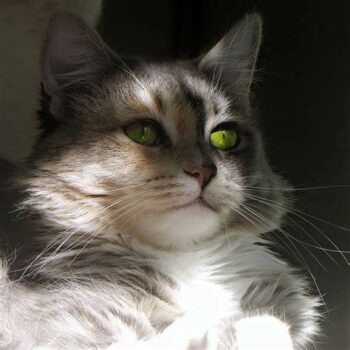 Though your cat can adapt to your way of interacting with the world, he will not adopt that way as his own. Though intelligent creatures, cats will not become humans, nor can we become cats. They act as a window to the world outside our human one. So, have you ever wondered about the inner life of cats?

Though the cat remains the cat, what can we learn from this different creature that shares our life? Even though he represents a totally different way of interacting with life, he has some lessons he can teach you. For example, if you would like to see a creature who lives totally in the moment, look at the cat.

One reason it becomes so easy for the cat to live in the moment lies in the fact that the frontal lobes of the feline brain are not as developed as the human brain. Therefore, he can’t project into the future. He does not make long-term plans. Thus, he stays in the present and deals with what happens at that time.

Which Has Become More Domesticated — Dog Or Cat?

Though cats learn socialization from living with us, and though more accepting of humans, they have not changed much more than that over the last few thousand years.

A Cat Can Not Digest Starches

A cat’s wild ancestors dined chiefly on meat, while dogs have added more of the amylase gene, which manufactures an enzyme that helps them break down starch. Because the dog has more copies of this gene, he can eat a more omnivorous diet.

The cat, meanwhile, has lost the gene necessary to encode several key enzymes. These include the manufacture of Vitamin A, prostaglandins and taurine, a necessary amino acid. Cats can’t synthesize these substances from plant-based sources, so they must obtain them from meat.

It’s harder to study cats than dogs. You can take a dog into a laboratory and do studies on him, because the dog remains content. A cat, very territorial, will exhibit modified behavior, and not the way he normally behaves.

Therefore, most often studies of cats occur in the cat’s home, as the data will reflect more accurately the normal reactions of the cat. Many scientists are also cat owners, and find it easier to study the animal in its familiar environment.

Why And How Do Cats Purr?

Cats purr to gain attention and to show contentment, and, at times, to help them deal with pain.

This unusual vocalization doesn’t vibrate the vocal cords by pushing air past them. Rather, the sound occurs because the cat rattles the vocal cords together, allowing them to purr when they breathe in and out.

How Do Cats Regard Us?

When a cat rubs against you, he acknowledges that you rank as slightly superior to them. In a family group, kittens rub against their mothers, females rub on males, and smaller cats rub on bigger cats. You will rarely see the reverse of this situation.

Cats tend to feel affection for those who feed them, care for them and play with them. It’s a bit harder to win trust. To build trust, always allow the cat to come to you, instead of your forcing your attention on the cat. When the cat approaches, reward him with a few treats, and don’t try to force kitty to stay when he becomes ready to move away.

If kitty suddenly bites or scratches while you are petting him, he’s signaling he’s had enough. Don’t miss the warning signs. If the ears flatten and the tail twitches slightly, you’d best stop the stroking and allow the cat to move away if he wants.

A Cat Remains A Cat

Cats are themselves — they do not try to act as any other creature. They do not need friends, though they do have friends and also will show you that they do care for you. They just always remain a cat, interacting with us when they choose, and then walking away.

If a cat has always lived indoors, chances are he will remain content, because he has no frame of reference to make him prefer the outdoors. However, if he has lived outdoors and suddenly becomes confined, he can become quite upset.

My cat, Carlos, was such a cat. He got picked up while roaming the streets. It is fortunate that I live in a small rural community, both here in Gustavus and when I lived in Bell’s Flats, 20 miles out of Kodiak. I allowed Carlos to go outside.

Of course, he had established hours. He could go out in the morning after breakfast, and he had to come in when I got home, which was around 7:00 p.m. in Kodiak. He would be waiting on the front steps when I got home. In Gustavus, I did not work, so his evening curfew was 4:00 for supper. Then he stayed in.

He adjusted well to this schedule, and during the day, divided his time between outside and in the house, either with me or by himself.

If you have a cat that becomes stressed when he can’t go outside, you might try training him to harness and leash.

Why Do Cats Bring Their Kills To Humans?

Contrary to the belief I have always had, the cat does not bring the kill to us as presents. The feline likes to feel safe when eating prey. Then, when they get the catch to the house, they remember that cat food tastes better than mouse, so they abandon their catch.

I can see the truth in this statement when thinking about Carlos. When we moved to Gustavus, he could no longer hunt rabbits, as he had done in Bell’s Flats, and he didn’t particularly like vole or shrew. Perhaps he felt I’d make better use of them.

I watched him in the early days in Gustavus, when he’d catch a vole and kill it, then use it in a “toss” game. He’d throw the critter high in the air, then run and find it and throw it again. I found it amazing, that he could throw something that high.

I do think he may have intended some of his small “kills” for me, as he certainly didn’t eat them himself. When we lived in Bell’s Flats and his friend, Tiger, got injured by a dog, Carlos would bring him presents of little voles (Tiger waited for him in our house when Carlos hunted.) which Tiger would gobble up gratefully.

Perhaps the ancient Egyptians had it right, states one of my references. Perhaps we’d have a better relationship with our cats if we worshipped them. They received such homage because they acted like royalty, being most self-assured and imperious.

Such a special creature — they love us in their own way, and tolerate our differences, or, if they don’t, they might just move out. They teach us how to live in the moment and how to receive satisfaction from life. Mysterious and fascinating, their differences create part of their appeal.

Perhaps we can all agree that the cat offers a fascinating companion about whom we still have a lot to learn.

4 thoughts on “Have You Wondered About The Inner Life Of Cats?”