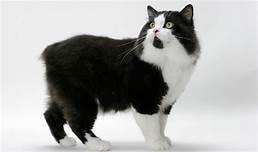 The Cymric cat breed is a relative of the Manx. This cat is a long-haired, tailless cat. (Pronounce the name with both c’s hard.) The cat is fairly rare, and the breed is recognized only in North America.

This small acceptance is narrowed even more, because in Canada, only the Canadian Cat Association accepts it, and some of the United States organizations accept the breed. However, it is accepted only for show, and is not allowed to compete for championship status.

Though the Cymric has occurred in some British Manx litters, it is not recognized there, and not in mainland Europe, either.

The Cymric got its name from a supposed Celtic connection. However, this link is rather dubious, 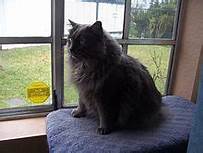 and is based on the fact that some inhabitants of the Isle of Man and Wales are of Celtic descent. The name Cymric means “having to do with Wales.”

The cat’s immediate origin is North America. The first Cymric was born as part of an otherwise normal Manx litter in Canada in the late 1960s.

As the Manx is known for being difficult genetically, it can add a variety of conformations and mutations. These sometimes cause death in the womb or skeleton abnormalities.

It is known that in the 1940s and 50s some breeders used Persians in their breeding programs. However, it appears that the Cymric came from a mating which involved seven or more generations of purebred shorthaired Manx.

In some way, the dominant “no tail” gene carried by the Manx combined with the recessive longhair gene.

How The Cymric Is Bred

In Canada, breeders began mating Cymric to Cymric. However, this practice led to lethal genetic abnormalities. As a result of this problem, they learned that they must keep tailed or stump-tailed Manx in the breeding line to avoid too much crossing of tailless cats.

Many of these offspring have been sold as pets, but to show a Cymric, it must be truly tailless.

Breeding of these cats is difficult. Besides the complications of keeping cats with vestigial tails, stillbirths and kitten deaths are frequent. In fact, one-fourth of all Cymric kittens fail to develop in the womb.

Besides this failure, a significant number of the kittens suffer from spina bifida or other skeletal abnormalities. Because of these problems, the breed has been only slowly taken up by the cat fancy.

In fact, some vets strongly disapprove of the continuation of Cymric breeding programs. They say that these programs cause unnecessary suffering. 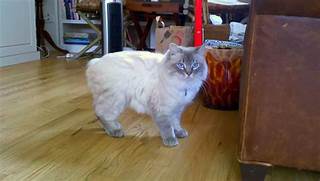 The requirements of the show standard for the Cymric is that he must be tailless with the rounded look of the Manx. When standing, the rump of the cat is higher than the shoulders. The gait of both the Cymric and the Manx are rabbit-like.

Other body requirements include that the body must have deep flanks and muscular thighs. The forelegs are short, heavily boned, and medium length. Cheekbones are prominent, with the nose at medium length. Eyes are rounded or slanted slightly upward, toward the outer eye corners.

This cat has prominent ears which are wide at the base. They taper to tufted round tips which are set slightly upward.

The cat has a double coat, which is medium to long. There’s a thick, cottony undercoat, a great asset because it does not mat. The topcoat is silky and glossy. The cat should show prominent breeches and ruff.

To be an ideal show cat, the Cymric should have a dimple or hollow at the base of the coccyx, which is the spine’s last vertebra. This standard is difficult to meet perfectly, so a slight rise at the coccyx is allowed, so long as it does not change the rounded appearance of the rump. As long as the body line is maintained, the absence of the dimple is not regarded as a fault.

A wide range of color variations is allowed. These include white, blue, black, red, cream, silver, tortoiseshell, bluecream, and brown. There can also be pattern variations. These include solid color, 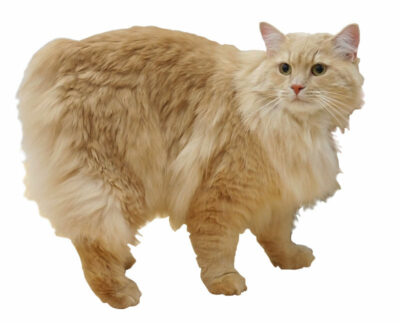 Eye color should be appropriate according to the dominant coat color. Eye colors include amber, copper, green, gold, hazel, orange, and yellow.

Amazing, that this cat is accepted in so many colors — as hard as they are to breed, you’d think there wouldn’t be enough of them to demonstrate so many color variations.

What Kind Of Care Is Required?

If you have a Cymric, your cat is quiet, intelligent, and affectionate. He likes people, but tends to bond with one person only.

Comb your Cymric at least once a week to remove dead hair. Since he does not mat easily, this trait makes grooming easier.

Even without a tail, like its cousin, the Manx, this cat can climb well. He will be happy to be an indoors cat, and is not too enthusiastic about going outdoors. Do provide activities that will substitute for hunting. He still needs exercise, and will be happy to play games that imitate hunting.

You are best off leaving breeding to experienced breeders, since with this cat the process is so difficult. If you wish to add one of these cats to your family, you might find a kitten with a partial tail for sale as a pet.

However, with the Cymric kittens, it is a good idea to get expert vet inspection to ensure that the kitten has no genetic problems.

The cat’s weight range is as follows: Males, 12 pounds; females, 8 to 12 pounds. The cat will live from nine to fifteen years.

He does have a tendency to shed, and can stir up your allergies, if you have such a problem.

It is important to watch the cat’s diet. As Cymrics tend to be quite fond of eating, you must not overfeed them, as they will then become overweight, with all the accompanying problems.

Feed measured amounts of cat food at regular times during the day. Do not leave food out all day, as this practice can lead to continuous snacking. Your vet can advise the best food to give your cat.

This cat, with his gentle, affectionate nature, makes an admirable pet. He likes people and will tolerate well-behaved children. Your Cymric will become a much-loved member of the family.