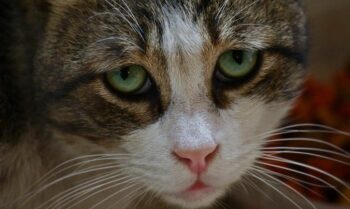 Cats have lived with humans for some time now, and they have learned many things about us. Through trial and error, they have developed techniques that help them get what they want. What do you think of their behavior? Do you believe that cats manipulate humans?

What Does “Manipulate” Mean?

Perhaps it would be best to define “manipulate.” To manipulate, one exercises unscrupulous control over a person or a situation. Is a cat unscrupulous? This word means to have no moral principles; dishonest, or unfair.

Does that fit a cat? The cat does not understand moral principles. These principles are for humans to understand and act upon. A cat will use his intelligence to figure out a technique or process that works but he does not do so because of dishonesty or unfairness.

I do recognize how we can become putty in the paws of a cat. I think they manipulate us because they have a mission to gain some benefit from their actions, but not out of any immoral reason.

When a cat goes through his little routine to try to get us to give him more food, I call him an “opportunist pig.” Perhaps that’s a bit milder than calling kitty a manipulator.

What Is Social Referencing?

Cats observe our behavior by doing something called “social referencing.” If they see us react in a certain way or demonstrate a certain skill, (such as opening a door) they will often copy what they see.

My black Kodiak cat, Uptight Cat, used to stand on a chair by the door and put his front paws on the doorknob. He couldn’t figure out how to turn it, fortunately for us, or he’d have been long gone.

Have you seen a cat jump up and grab a door handle that simply pulls down to open? That one proves a lot easier than having to turn the knob, and the result is a cat escapee. Social referencing taught him the behavior.

After All, Cats Chose Us

Scientists think that the cat demonstrates manipulative behavior as they have learned to interact with humans in this way. The animals chose us, after all; we didn’t choose them. They made themselves popular and useful in early settlements because they hunted and killed rodents in the food supply.

Then they came indoors and found out how comfortable it seemed, after so much time outside, so they opted to stay. Then they took on the process of domesticating us, and learned what things worked if they wanted something from us.

The scientific world has isolated a specific kind of purr that could have developed to take advantage of our nurturing instincts. It’s called a “solicitation purr.”

While most purrs sound low-toned and consistent, the solicitation purr has a high-pitched cry embedded within it.

These solicitation purrs were recorded and then played to a group of a mix of people, not all of whom owned cats. All agreed that these sounds came across as more urgent, less pleasant, and hard to ignore. When they listened to a purr without the high-pitched sound, they agreed it sounded less urgent.

Whether the people listening owned cats or not, their interpretation of the sounds were the same. The researchers concluded that somehow the high-pitched sound affects us deep in our brains.

Perhaps that high-pitched tone seemed similar to a baby’s cry. Perhaps this special purr taps into our nurturing instinct — “Oh, the baby’s crying. Better feed it.” Somehow cats have found a way to trigger our basic caregiving instincts, and it works! Therefore, the technique gets passed down through cat generations.

Turn your sound volume up as far as it can go — hope you can hear this.

Studies by researchers have determined that the bonds between cats and humans may be similar to the bonds humans have with other humans. Thus, it may not come as so strange to hear someone describe their cat as their child. Perhaps the statement carries an element of truth.

Many of us think of cats as cute. Have you considered that such a reaction may have a basis in the appearance of a baby — large head, round face, big eyes. The cat and the baby evoke a similar response. Doesn’t that give credence to the idea that, like with the cuteness of babies, the cat evokes the same nurturing response.

Does Your Cat Really Love You?

So, if a cat just manipulates you for food, does he really love you? Studies have shown that when cats had a choice between food, toys, and human interaction, half of them chose to interact with humans. Thus, be reassured — your kitty does indeed care about you.

It might be comforting to know that, as cats in this study of the purr with the embedded cry included a mix of domestic cats and shelter cats, the implication is that cats value humans, even if they don’t know them well.

Perhaps we should become the child and the cat the parent — after all, parents know how to get a child to do what is wanted. Your cat-boss seems to have the same skill. Over the course of their years with humans, cats have learned some things about how we operate, and pass this knowledge on.

So, just relax and enjoy your kitty, and every once in a while compliment him on his ability to control you.

2 thoughts on “Do You Believe That Cats Manipulate Humans?”