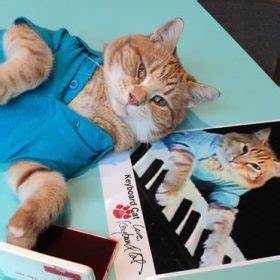 We humans love our music. Our brains send all kinds of acoustic signals received from music that trigger emotions within our heads. Music is a positive force for us, but is it the same for cats? Do cats like music?

It turns out that they do like music, but their taste is a bit different from ours. A study published recently in the journal, Applied Animal Behavior Science, believes that the music cats enjoy needs to be species specific.

It is true, though, that some cats have found certain human music to be calming. Sometimes cat shelters will play classical music for their residents, as they believe it creates a soothing atmosphere. But do the cats really love it?

Researchers have found that, though cats don’t seem to have any particular preference for our music, they do like the right kind of music. It’s all based on how we communicate.

For humans, the music we make is based on our language and how we react to the world. However, cat language is totally different from ours.

Music taste can be species specific

Discovering that music is species specific is helping researchers to learn what, exactly, is different about the music that is appropriate for a feline.

Tempos of our music are often similar to the beat of the human heart and it has a vocal and acoustical range that we can identify with.

Cats, however, have a different biological makeup and different senses than people. Therefore, the music that would appeal to them has very different qualities. Researchers are now starting to create pieces that function in the same range that cats use to communicate.

Because they are excellent hunters, cats’ senses are very refined. They approach prey soundlessly; as they do so, they can feel their environment through the specifically sensitive hair of their front paws.

Cats’ hearing is phenomenal. They can hear the slightest peep from a mouse, even in their dreams. Because of this acute hearing, they don’t like loud, booming music. Keep the volume very low!

Perhaps this explains this experience: Around Christmas this year, one night I’d just gone to bed and waited for the cat to join me. As I waited, I began singing a Christmas carol in a very loud voice

Pogo, my cat, got on the bed, came over to me, and bit me on the nose! Apparently the song was not to his liking, though I thought I sounded pretty good.

So, what tunes have the most appeal to the cat?

Scientists at the University of Wisconsin in Madison looked at how different cats reacted to a variety of our human music. They found that the cat reacted in a much more positive manner if the music duplicated sounds that are enjoyable to cats throughout their lives.

An early rhythm they associate with comfort and security is the vibration of their mother’s heartbeat, purring, and the drinking sounds made when suckling on their mother’s teats. These sounds are very important to cats.

They all communicate in high frequencies. They prefer sounds that are an octave higher than the 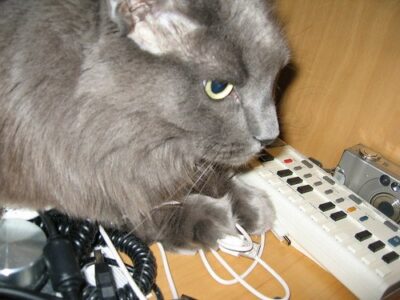 Thus, when composing for cats, one should include instruments with a high pitch, such as the violin, cello, and electronic keyboards. These can more exactly duplicate sounds in the cat’s life experience.

Speed is important. Purring creates 1000 beats per minute. Therefore, frequency and tempo at “purr speed” synchronizes the heartbeat and allows the cat to relax completely.

If you are limited to playing human music for your cat, soft classical pieces can be soothing. These soft, harmonious sounds can calm a cat and lead to relaxed breathing and a well-balanced heartbeat.

Try playing natural frequencies and sounds. For example, you might play a recording of the sound of ocean waves. Certain music used for meditation practice may also have a soothing effect on both you and your cat.

Some musicians used research findings to compose special cat music, based on the frequencies the animals use to communicate. Then, by adding conventional musical elements, the compositions were made into something we, too, could enjoy.

Using these species-appropriate sounds in the music as established from the research results, composers like Oliver Kerschner, Charles Snowdown, and David Teie have written music for cats. Though these pieces may not be your favorite compositions, cats love them.

Here is a sample of a recording of music written by David Teie. David is a professional cellist with the Washington National Symphonic Orchestra. Cats love this music — they purr and even rub

I have found that my cats have enjoyed music in certain circumstances. When my friends came over to the house to play music, my last cat, Carlos, always got on the table where we laid out our music and sprawled out on top of it. When we made him move, he would be highly indignant.

When I lived on Spruce Island, I used to walk in to the village, Ouzinkie now and then to play music with a man and his son. (They played guitar and I played banjo.)

The grandmother lived across the street, and would always walk over to listen. Her cat came along. I’d lay my empty banjo case next to me, and the cat would curl up in the round end — perfect bed for a cat — and sleep until we were finished. I am not sure if it was just that fine bed or if she also enjoyed the music. 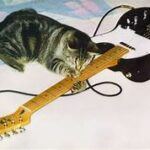 Testing showed that the cats had a “significant preference” for and interest in the cat-appropriate music, though they might not react to human songs at all. It was also found that the music brought better reactions from younger and older cats than from middle-aged ones.

If you would like to acquire one or two of these cat-specific recordings, I am listing a couple that you can purchase from Amazon. Just click on the image or the blue link to be taken to Amazon where you can make your purchase. Please note that, as an Amazon associate, I’ll receive a very small commission from your purchase.

If you would like to have your own cat-specific music for your feline friend, you can order one of these from Amazon.

Music for Cats Album One

As an Amazon associate, I earm from qualifying purchases.

As an Amazon associate, I earn from qualifying purchases

Music Cats Love While You Are Gone

(Calm music for cats for relaxation and separation anxiety)

Through a Cat’s Ear: 3-CD Box Set: Music for Calming