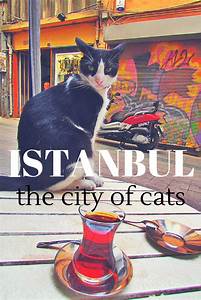 I’ve added a new city to my bucket list — Istanbul, Turkey. It’s been said that Istanbul would not seem the same without their cats, who have become part of the city’s soul. It feels as if the felines own the city. Indeed, since the cat is Turkey’s national animal, its presence in such number should not surprise us. 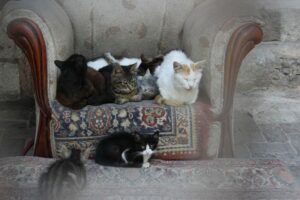 No one knows for sure how many cats live in Istanbul. One article I read says there are “hundreds of thousands” of cats in Istanbul. A New York Times article claimed that Istanbul had a population of 125,000 strays. You will see cats everywhere you look.

You may find that predominantly Muslim countries all love their cats. The reason: they are considered ritually clean animals in Islam. Muhammad had a fondness for cats, which also helps their popularity. One story claims that Muhammad cut off the sleeve of his robe when he had to rise for prayers, so he would not disturb the cat sleeping on it.

In another tale, a cat saved Muhammad from an attack by a deadly serpent. In gratitude, Muhammad supposedly blessed the cat and gave it the ability to always land on its feet.

Where Did All Those Cats Come From?

How did all these cats arrive in Turkey? If you remember the story of ancient Egypt, you may see a similarity. Fishermen kept cats on their boats to deal with rats and mice. In port, cats might jump ship and move to the city. Rodent control there gave them a job that many people appreciated.

A Britisher, Hilary Sable, who has lived in Istanbul for several years, has founded the “Cool for Cats” aid group. She created the group in 2011, and now it has more than 6,000 members.

Sable says that, though many people love and feed the cats, some of their biggest problems stem from intentional human cruelty and from diseases. The group works to help care for the cats and to try to keep their problems to a minimum. “We are not an animal rescue, but an animal support group,” said Sable. When people come to Istanbul and fall in love with a cat and want to take it home, the group will help make that happen. 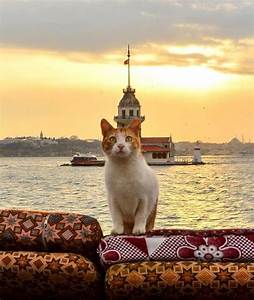 She says that they have animals going all over the world, as far away as Australia, with quite a few of them going to Germany and the UK as well. The group helps with documentation and all the paperwork. The animals have to have certain vaccinations. Sable explains that she deals with lots and lots of regulations, and she has become an expert.

In parts of the city, in parks or around some neighborhoods, some districts have created cat houses. Small cat villages have been established, with housing for many cats.

Sable also said, “We don’t get proper funding from anyone, so we mostly rely on the kindness of strangers.” Therefore, if you are a kind stranger, perhaps you can contact the “Cool for Cats” group and send a donation.

Enjoy the video of Istanbul’s cats, provided here. In 2017, director Ceyda Torun created a documentary of street cats. The video is known as Kedi. You can find it on YouTube, but you have to either rent it or buy it.

The documentary Kedi follows seven stray cats on their daily adventures in Istanbul. This charming film shows the pretty side of the picture of the lives of these cats. Hopefully, the city and its cat enthusiasts will find a way to deal with needed medication and disease control.

Today, Cats of Istanbul, one of a handful of groups created to help stray animals in the city, has about 300 active volunteers who meet whenever a need arises. They fix cages in shelters, set up cat

houses in neighborhoods, feed the cats when the weather becomes nasty, or simply just give them affection.

Many people in the city do their part to help out the many cats. When you wander the streets of Istanbul, you’ll notice many small containers by the sides of buildings. Residents dole out discreet food rations. Though cats do not receive formal adoption, everyone does their part to care for the animals, forming a giant cat-cooperative community.

Even social media has gotten into the action. They, too, have noticed the popularity of cats in Istanbul. One cat fan, Rana Babac Celebi, the founder of Cats of Istanbul, claims responsibility for the popularizing of the Instagram tag, and started a Hagia Sofia Cat account on Instagram. This group now has 106,000 followers. 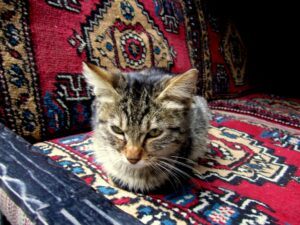 Turkey has its share of viral videos of its animals. For example: A train stops to wait for a stray cat to finish drinking water from the ground; an imam puts cats in a mosque; a cat at the top of an escalator stops traffic because it stands in the way and refuses to move. Some cities even have statues of cats.

The New York Times, in a piece about animal welfare, states that the cats have even become a political issue. The Times says, “The issue has become so popular, now politicians cannot afford to alienate animal lovers any more.”

“Normally, they never agree on anything else, but they were all on the same page about the street animals. This must be an historic moment.”

Anyway, I’d love to go to Istanbul and visit all those cats.

8 thoughts on “Did You Know Turkey’s National Animal Is The Cat?”