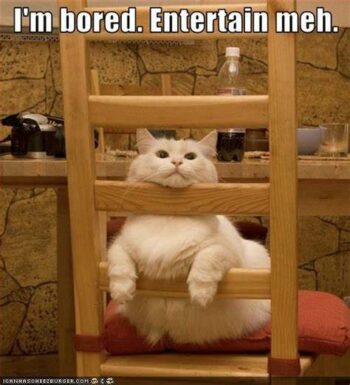 Have you tried to create homemade toys for cats? Why should it be important to do so?

Cat parents have an ongoing argument about whether a cat should be let outside or kept in. In the United States, the recent trend has developed suggesting they are safer inside and will live longer lives. The big outside world is fraught with dangers for small cats.

Of course, it’s important that you have a happy cat. Some advocates of letting the cat run free say that, even if their life becomes shortened, if it made them happy to go outside, let them go. Others say that a cat can have a happy life inside if they have enough to interest them.

That’s where creating homemade toys comes in. If you can think of original and imaginative ways to keep your cat happy, then get those brain cells working to make up some new diversions to help alleviate kitty boredom.

The Nature Of The Beast

A cat is a predatory animal. Granted, he can become predator or prey, depending on the circumstances. His instincts and lessons from his mother have helped him learn how to avoid the predators and hunt the prey.

He is by nature a hunter. If he is locked in a house, his fundamental reason for existence is thwarted. How can he hunt inside the house? Oh, yes, he catches the occasional rodent and does a great job of clearing out flies, but how can he participate in a real hunt?

Fortunately, cats have imagination. With your help, he can imagine the hunt. Your job, then, becomes that of creating a mock hunt that satisfies his instincts. Just as when he was a kitten, he becomes involved in pretending that he stalks and battles wild creatures.

What Are Signs Of A Bored Cat?

How can you tell if your cat is bored? If you have to work, or must leave home for extended periods, your kitty might succomb to boredom because he has no playmate with whom he can interact. Or, if you are home, don’t establish play-times, or ignore him, he could become bored.

Watch for these signs:

How Can You Entertain Your Kitty?

Play with him! If he does not have interactive toys, make some. Read some suggestions from this post; check out the references at the end; go online and ask for suggestions. You can buy ready-made toys or you can save money by making your own. You can augment the ideas here with many more.

The following include some ideas you can try:

Perhaps the best way to create a pretend hunt for a cat is with a wand toy. Attach a string to a stick, basically. You can use any kind of long, thin “handle,” and to the end you might attach any number of different things: Feathers, ribbons, catnip toy or mouse, for example.

Then, try to move the wand so that it imitates a small critter, running. Whipping the toy back and forth in front of kitty’s face might garner slight interest, but you’ll get more if you drag it and he has to chase it. Make the movement of the toy as realistic as possible.

Catnip becomes a good place to start if your cat happens to be one who reacts to the herb. If kitty likes it, you can use it in all sorts of ways. I like to sprinkle some on his scratching posts, as he enjoys getting a whiff while he’s working those claws

Catnip can be placed in all sorts of containers. The catnip mouse is a good example. Not only does the smell attract the cat, but it’s shaped like a favorite prey. If the catnip makes kitty playful, that’s good news. Encourage him to chase it and catch it.

If you don’t have a mouse, tie some catnip in the bottom of an old sock, or cut out a piece of an old tee-shirt, tie the catnip tightly inside, and let kitty enjoy it.

Catnip spray can also prove helpful. Spray it on toys, wands, scratching posts, or cat trees, for some examples of ways to use it.

A kitty has a need to scratch, so make sure to provide a scratching post that he likes and will use. Sisal or carpeted posts can work well. I’d suggest adding an extra post made from cardboard, as some cats really like them.

Pogo would only use his cardboard scratcher, though Mocha has both. He uses his sisal-and-carpet post about as much as he does the cardboard. Giving kitty something he likes to scratch on will give him great stress relief.

In the reference listed below from care.com, you will find instructions for making a tree-stump post, A link to a video shows you how to make a rolled-cardboard stump. How could kitty resist such a creation?

Another way to enhance kitty’s bird-watching: Hang a cat bed in a window looking out on the yard where birds congregate. He will spend long periods of time in that bed, watching the birds outside.

Time For Some Serious Bird-Watching

You can buy videos from various sources that give the cat a chance to watch birds or small animals, and can provide hours of entertainment for your house-bound kitty. They certainly worked with my last cat, Carlos.

I had a migratory bird video that he watched for long periods of time. He’d sit on the coffee-table in front of the television and stare intently at that screen.

I have a bureau against the window in my bedroom, and Mocha enjoys sitting there. The driveway is just outside the yard fence, and often a large puddle forms there. The birds use it for a birdbath. The cat watches them as long as they are there.

How About A Kitty Motel?

Cardboard boxes can be a boon for a bored cat. Make houses for her and cut in doors and windows, or lay out a line of boxes next to each other, each with a connecting door. Make a couple of two-story ones, sturdy enough to hold kitty at the top.

Perhaps she doesn’t need a whole motel — she may be happy with a paper bag. It’s amazing how much enjoyment a cat can have, running in and out of a paper bag, or perhaps napping there, just for the change.

Think Of Ways To Create With Toilet Paper Rolls

Save the cardboard roll inside your toilet paper or paper towels. I’ve started a collection, so they are there when needed. From these, you can fashion all sorts of cat toys. Cut them in various lengths and fit them together in a small box. Put kibble at the bottom of all or part of them.

Then kitty can work on retreiving that food.

This morning, I made a little box from a toilet paper roll, cutting each end and folding it in. Then I put some kibble inside. Of course, I gave it to Mocha right after he’d eaten, and he wasn’t too interested…he will respond more when he’s hungrier.

I read this idea online somewhere, and have found it works well. Put a small toy in each cup of a muffin tin. Put a couple pieces of kibble under each toy…or leave a few empty if you choose. Give to kitty, and watch him figure out how to get the kibble out of each little cup.

Here’s a Jackson Galaxy video in which the “cat daddy” tells you how to keep kitty from being bored:

Here is your chance to fire up your brain cells and think of creative toys you might make. If you have a great idea, share it with us! We can all use new suggestions.

For more ideas, look at the references below, or go online to search out an idea you like. The most important thing: realize the importance of play in keeping kitty happy and interested. You will both benefit by such an enhancement to your daily lives.

2 thoughts on “Create Homemade Toys For Cats To Alleviate Boredom”