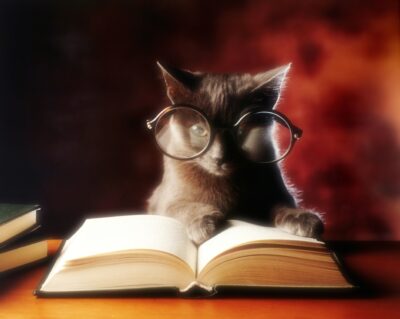 Hello, you two-legged readers! It’s Lucinda the literate cat again, with a new book summary. The Cantankerous Cat Lady has given me a six-week contract to write more summaries for her blog. I am happy to do so.

I am glad that so many of you liked my book summaries. I even received a couple of pieces of fan mail. How purrfect!

The Cantankerous Cat Lady took a sample of my work to her writer’s group, where they praised me and thought me clever. However, Abigail, a poet and the group’s ramrod, decided that, instead of Lucinda, I should be called by my nickname, which is Lucy.

Abigail the poet says, since Lucy only has two syllables, it makes for better alliteration when you say “Lucy the literate cat.”  My Cantankerous Cat Lady prefers Lucinda because she says it sounds more musical. You decide.

I will do just one book this week, because it is one with several stories — more than 400 of them, in fact. It is called Aesop’s Fables. I’ll give you a taste of the stories by summarizing and commenting on a couple of them.

As I stated in my last review, these two-leggeds like to write stories to help educate their young. We cats learn a lot of what we need to know from our mothers. It makes me wonder if these two-legged children are weaned too soon. Maybe it just takes them longer to learn.

The first story I’ll tell you about is called The Tortoise and the Hare. In this story, a porpoise, called Slow and Steady, challenges the hare to a race.

This hare is not someone I would like, as all he did was brag about how fast he could run. (I wonder if he could outrace a fast hunting cat!) The tortoise, Slow and Steady, got tired of his bragging and challenged him to a race. The other animals gathered to watch.

Well, the hare started fast and was well ahead, so he stopped to rest, and fell asleep by the road. Now, that’s the time I would like to be nearby so I could attack him while he slept. I’d have a juicy rabbit for dinner. 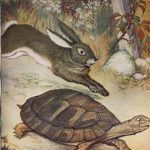 Slow and Steady, meanwhile, never stopped, but plodded slowly towards the finish line.

When all the other animals began cheering, it woke up the hare, who was too far away to catch the tortoise, so Slow and Steady won.

This story does remind me of my time with my mother. She tried to teach us to stay focused on our destination and not to be distracted by less important things. If we were hunting, we had to pay attention to the task at hand — no napping! If the hare had remained focused on his destination, he would have won.

The Dog in the Manger: This story is about a dog who found a manger of soft hay in the barn, climbed on it and fell asleep. An ox came to eat and the dog, enraged at being awakened, snarled and barked at the ox, and attempted to bite him, not letting him near to eat. The poor hungry ox could not get near his hay.

That’s a dog for you — protecting something he doesn’t own and which he can’t eat, just because he was there first. He certainly wasn’t going to eat that hay.

Then the farmer came in the barn and saw the dog being rude to the cattle. The farmer took a stick and chased the dog out of the barn.

Hit him once for me!

It is too bad the ox was so gentle and sweet. If the dog had tried to chase me from my food, I would have jumped on his back, dug in my claws, and ridden around on his back until he decided the barn was no place he wanted to be.

The Fox and the Grapes: A fox saw hanging grapes and wanted to eat them. He jumped several times and tried to grab them, but could not reach them. So, the fox left, deciding the grapes were probably hard and sour anyway.

That is no excuse! It’s just something the fox made up because he was too lazy to figure out how to get those grapes.

He could have asked a cat to run up the tree and knock down the grapes. The cat wouldn’t eat them. That fox just didn’t have enough ambition to find a solution.

The Crow and the Pitcher: A thirsty crow finds a pitcher with some water in it. When he dips in his beak, he can’t reach the water.

He starts dropping pebbles into the water, and when he dumps in enough pebbles, they have raised the water level enough so he can drink it. 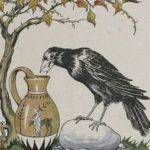 This story is all about persistence. To solve a problem, keep trying until you find a solution.

I can think of a good example from my own experience to demonstrate. When I want to eat in the morning, I first have to get the Cantankerous Cat Lady out of bed. I use many techniques. If meowing isn’t effective, I might jump on her a few times, or just walk around on her. This guarantees wakefulness. Then I have to get her to move. I pat her face, or lick her fingers, or perhaps her nose. I keep trying until I am successful. Persistence will pay off.

These are good stories. I like them because they are so short. I can read one or two and then stop to take a little nap while I mull over the meaning of the tale.

I hope you enjoyed this little review.  I will be back next week with more reviews from Lucinda, the literate cat.

18 thoughts on “New Book Summary By The Literate Cat”