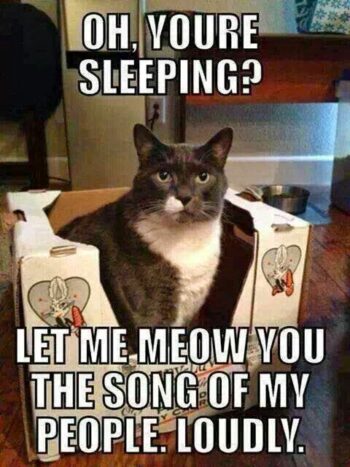 Did you know that cats can make more than 100 sounds? Like our words, each sound has a different meaning. Sometimes we can tell immediately what these vocalizations mean, but to our ears perhaps they seem like a foreign language. How well can you interpret the sounds a cat makes?

In this post, we will look at 10 sounds a cat can utter. Some of these might need a subdivision into more than one category and in those cases, I will try to make the sound description clear.

We have all heard this sound, as it is directed mostly to humans. Except in the case of kittens, who meow for their mother, and might receive an answering meow from her, cats do not meow to each other.

“Meow” has no specific meaning, but it is used to call attention to something. I read a quote that said something like, “meow” is like “aloha.” It can mean anything.

Sometimes you will find the meow’s interpretation quite simple. If the cat meows at the door, he most likely wants out. If he meows in front of an empty food dish, you might interpret the sound to mean “more food.”

As a general rule, the more intense the emotion connected to the meow, the louder the sound becomes.

Most of us find the purr a beautiful sound. It soothes us as well as the cat.

Your cat has several reasons to purr. A mother cat purrs to her kittens to help them find her; the kittens also purr when they are feeding.

If you have a contented cat, he may purr a lot to express his feelings. It’s a pleasant thing to hear that purr and to feel kitty’s body vibrating because of it.

Purring also helps a cat through a difficult or traumatic experience. A visit to the vet might trigger the purr, as also the experience of illness or pain. The body vibration can help to heal. Cats even purr very often when death comes near.

Therefore, the purr expresses some kind of intense emotion, either pleasant or unpleasant. Happiness or pain might bring on that wonderful sound, understandably to heal.

Though these represent two different sounds, they are often related. If the cat growls, he makes the point that he has become quite upset, and issues a warning to stand back before he becomes ready to fight.

After the growl, the hiss represents the next warning stage in anger escalation. Growling and hissing can be directed not just at humans, but to other animals as well.

This sound comes from the cat with a closed mouth. This short vocalization ascends the sound scale, and lasts less than one second.

Mother cats use the sound with their kittens, but it also becomes a way to greet loved ones in a friendly way. When my cat, Carlos, brought voles in for his injured friend-cat, he always delivered the gift with a few little chirps. So sweet!

5) Yowl, Or Perhaps A Scream

The yowl’s intent means “back off if you don’t want a full-blown attack.” The yowl sounds like endless meowing, done in a high pitch and very high volume.

It can also serve as a warning when another cat invades your kitty’s territory. Awakened one night by a continued loud yowling, I jumped out of bed and followed the sound to the kitchen.

There, I found Carlos at the kitchen window, staring at another cat on the other side. This cat had no business in Carlos’s territory, and he let the intruder know in no uncertain terms.

Once I discovered the cause of the yowling, I chased off the other cat and eventually calmed Carlos down. It relieved me to know my cat hadn’t somehow been injured.

You might hear this sound if the cat looks out the window, perhaps at a bird, and signals excitement and frustration because he can’t get to that critter.

Big cats also chatter. They have the intention of luring in prey, and could mimic the call of the hunted creature, so it becomes easier to catch.

When making this sound, they set up an acute vibration as the jaw trembles in excited anticipation. “I want that critter for breakfast.” Unfortunately for the cat, the whole situation may leave him frustrated because he cannot get to the object he desires.

Perhaps your cat is on the floor and wants on your lap. He might make a quick “bip” or “eck” sound. This one gets your attention, and lets you know he wants to jump, so have your lap ready.

This sound comes from a mix of purring, meowing, and growling. Even though the sound incorporates the growl, it does not have a negative meaning. It’s more a sound released to express gratitude and satisfaction, perhaps for a meal or a good petting session.

Again, this one can have the purpose of gratitude for your attention. You will have to interpret the meaning depending upon the situation at hand.

This one often comes from kittens during their first weeks of life. Similar to a meow, the kitten makes the sound very sharply and at a high volume. It communicates urgency or danger. Perhaps the kitten has become trapped somewhere, or just firmly believes it’s time to eat.

If the sound comes from a grown cat, high-pitched; sudden, and very loud, it may mean the cat has hurt himself. Best check on him to make sure he has no injuries.

During the mating season, almost all animals who vocalize will emit “sexual calls.” Both male and female cats vocalize with intensity a long lament, communicating their presence and attracting partners.

Males will use this sound to warn other males of their presence in a certain territory.

These 10 examples of cat sounds represent approximately 1/10 of the possible sounds the cat might make. If you’d like a lifelong project, try to record and give meaning to all the cat sounds you hear. You could do us all a great service with such research.