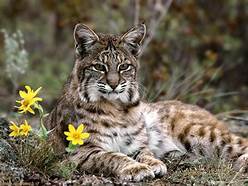 Today, there are bobcats in the news. Read this post to learn some basic bobcat facts, as well as to learn about some newsworthy bobcats. They are quite common in many parts of the United States; sometimes their life journey overlaps with ours.

The above information comes from bigcatrescue.org.

This cat weighs between 13 to 30 pounds, so not that much different from a domestic cat. He stands 21 inches high and his length ranges from 30 to 50 inches long. 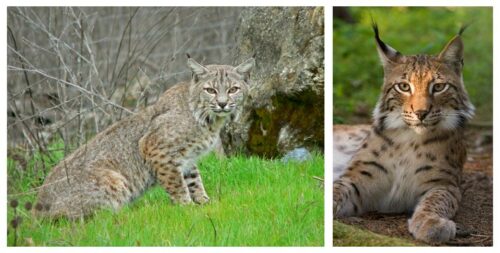 Where Are They Located?

The bobcat can be found in the United States and in Southern Canada. Some also find their way to Mexico. He likes forest, coastal swamps, desert and scrubland. At times he has wandered into someone’s back yard. He is very adaptable and can live in a wide variety of habitats.

What Color Is His Coat?

These animals range in color from light-grey, yellowish-brown, buff, or a reddish brown. They are always spotted. The bobcat is often confused with his cousin the lynx, a slightly larger animal.

Look at the tail — On the lynx, the whole tip of the tail is black, while the bobcat’s tail is black on top and white on the bottom. Other differences: The lynx likes cold northern latitudes. Because their legs are longer, they can travel better through deep snow. They have shorter tails and footpads that 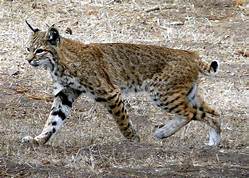 are well-protected with dense fur.

It is thought that sound might be more important than sight for the lynx when locating prey, which is why the lynx’s ear tufts are longer, aiding with hearing.

What Is Their Diet?

These cats will eat almost anything. Their main diet consists of rabbits or hares. They also eat rodents, such as squirrels or mice. They are known to hunt small deer, beaver, birds and bats, snails, lizards, and domestic animals.

If there is a bobcat around, you’d better keep your dogs and cats inside and pen up the sheep, goats, and poultry. The bobcat won’t ask permission first — he is just looking for a ready meal.

This cat is an excellent climber, so he can go up a tree to find dinner (or to escape from a large dog.) He can also leap high enough to catch low-flying birds.

He is a patient hunter. When hunting or simply patrolling his territory, he can travel for two to 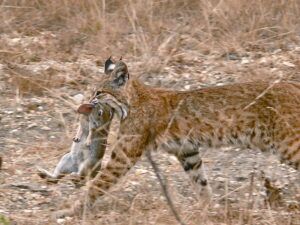 seven miles (three to eleven kilometers) in one evening. His home range can be as large as 20 square miles.

The bobcat is primarily a nocturnal animal, and does most of his hunting and moving in the early morning or late evening hours. Because of these nocturnal habits and his preference for remote areas, the interaction between human and bobcat are rare.

What About Breeding Times And Family Life?

These solitary animals, though they can breed year-round, have a preference for mating in early spring, during February and March. There’s a 62-day gestation period, with an average litter size of three kittens.

These may be born in April or May. Males just plant the seed, but don’t assist with raising the harvest of kittens. When it is time for romantic interludes, the normally quiet cat becomes much noisier. These conversations between male and female can include hisses, purrs, snarls, calls, and growling sounds. 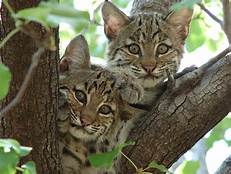 Once the kittens are born, the female drives away the male, though “dad” may stay in the area. The female nurses the kittens for a couple of months, and then she takes them traveling to a new den. She may repeat this action several times while they are growing up.

The worst blow to the once-large population of these cats came from massive destruction of their habitat at the turn of the century. At this time, the loss of forest area and the building of roads destroyed the habitat of these animals. Their habitual territory was destroyed and some were killed by vehicles. States began putting them on the endangered list.

It is important to attempt to track their locations and territory in order to protect them properly. They need to have ways to safely travel their large territory. One such project. as an example, is a Division of Wildlife project called Connecting Habitat Across New Jersey (CHANJ), released in 2019, provides a plan to assess and recover the population, and lays out the actions needed to support cat recovery.

If you look online, several states have done research and issued information on the condition of the bobcat population in their area. It’s good that states are working to keep this population from being destroyed.

Wildlife photographer began photographing these elusive bobcats on a friend’s ranch in South Texas in 2017.

Her original goal was to see if the cats would let her in to their world. As she watched the very protective mother and her kittens, always so curious and often precocious, she hoped that by showcasing the animals’ behavior and the life they lived, she could change the way they are viewed and treated.

She remarked on their similarity to us — “They’re mothers and fathers, sisters and brothers. They teach lessons and they learn lessons. I would love for people to see into the lives of these animals, and to realize that we are closer to these creatures than we think.”

If you monitor the news reports online about these animals, you will find some interesting stories. For example, in Pueblo, Colorado, my old place of residence, a woman thought she’d found a stray kitten that approached her and then crawled under the hood of her car.

Heather Mills, visiting from Indiana, wanted to help the small cat. So, she lured it into her car with a tuna sandwich. When she posted its picture on Facebook, she learned that it was a bobcat, not a domestic cat.

Then she called Colorado Parks and Wildlife, who rescued the kitten. They took it back out into the wild and released it.

In another incident in Picture Rock, Arizona, a woman heard a noise and noticed that she had a broken window screen. When she walked into her closet, she discovered a bobcat there.

Animal Experts, Inc. responded to her call for help and came to remove the animal. They used a catch pole to get the wildcat outside the home

The Animal Experts people said it is not normal for a bobcat to enter a home. Perhaps it saw a lizard on the window, which prompted it to crash through the screen. Surprise! Now what to do?

There are several stories of people seeing a bobcat in their yard. Wouldn’t that be a thrill, to see a wild animal exploring your property?