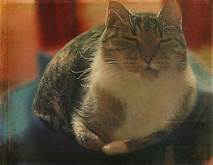 If you love your cat, you probably also love that purr that almost all cats make. For them, it is a form of communication. However, can you interpret their intent? What does cat purring mean?

Even though it is a cat’s most common sound, we know less about it than we do about all the other sounds they make. We can often see that cats purr when they are content. However, the purr can have other meanings. What other things might he be communicating?

A Main Theme Of The Purr Is Contentment 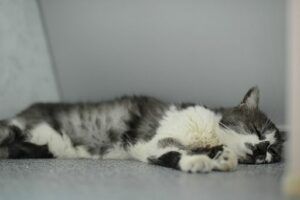 If the cat is happy, you can tell by how relaxed she is. If she is lying still and quiet except for that purr, you can safely assume she is smiling with the purr.

If the cat wants food, she may also purr. Researchers in Britain, after studying the purring sound made during mealtime with the purr at other times, have found that the sound is different.

Kittens begin to purr when only a few days old. This sound can help their mother know where the kitten is and if it is okay. The sound will help the kitten bond with its mother, who might use her purr as a lullaby to get the baby to sleep.

Other Uses For The Purr

Often a cat will purr when it is hurt or in pain. One thing this purring can do is soothe the cat. Research also suggests that their purr can help them heal faster.

The vibration caused by the purr can create a series of related vibrations within their body. These can have some very positive effects. Here are some of them:

Purring can help us humans too. The sound often calms and pleases us. If we are stressed, a good

purr can help relax us.

I have a friend who was afraid of cats when she was little. When they purred, she thought that they were growling at her. It’s too bad no one taught her differently, as she missed out on a lot of pussycat pleasure.

I have always loved a cat’s purr, though I can understand how a child might be afraid of the sound. For me, it is soothing and reassuring.

A Cat’s Purr Frequency, From 20Hz to 150Hz, Helps With Healing

It has been found that the frequency of a cat’s purr — which has a range from 20 Hz to 150 Hz — helps promote bone growth. Bones harden in response to pressure. Perhaps other frequencies are helpful in healing tissue.

This frequency — 25 – 100 Hz — corresponds with established frequencies used in therapeutic medicine for humans. Bone responds to 25-50 Hz, while skin and soft tissue respond to around 100 Hz. Doesn’t this information make you marvel that we had to learn it through scientific research, and the cat just makes the sound instinctively?

When we see cats purring while dozing, they may be involved in a form of self-repair. It is possible that one reason they spend a lot of time resting during the day is that it gives them a way to avoid injury through over-exertion.

Their purr is a low-energy way to help keep bones and tissues in good condition while they are resting.

The Sound Of Purring Is A Stress Reliever

The purr is also a form of stress relief, both for you and for the cat. It has been found that just by petting a cat, we can reduce stress. It is believed that cat ownership could cut the risk of stroke or heart disease by as much as one-third.

The cat’s purr mechanism involves their larynx and their diaphragm muscles, both when they exhale and inhale. It is not completely understood how their central nervous system generates and controls these muscle movements, but the result is certainly a sweet one.

For the feline, the purr is a form of communication. It is meant for themselves or for those nearby, as the volume of the purr is too low for the sound to travel far. Often the purr is associated with

positive social situations, such as nursing and grooming, or it might be expressed with the intent to help them relax and to express friendliness.

Cats can also purr to help a friend cat who is injured. They have been observed lying next to each other when one is injured, and both animals are purring. This might be called “purr therapy,” something I have experienced myself from time to time.

It’s been thought that their purr might be helpful to astronauts, as purring can stimulate bones so they don’t become weak and brittle. Some researchers have suggested strapping vibrating plates to astronauts’ feet during long space flights. It is thought that these plates might help retain bone density.

Today it is believed that most cats can purr, though the jury is out on some big cats, such as the lion, leopard, jaguar, tiger, snow leopard and clouded leopard. After all, it would be rather hard to get close enough to these big cats to be able to hear them purr. We do know, however, that cheetahs and cougars do purr.

So, as we see, there are many reasons why a cat purrs, and researchers may find even more. If you share your life with a cat, I am sure you have found that this soothing sound is something to enjoy. Let your cat help you de-stress and enjoy life more. Find solace in that purr.

The references I used for this post are as follows: