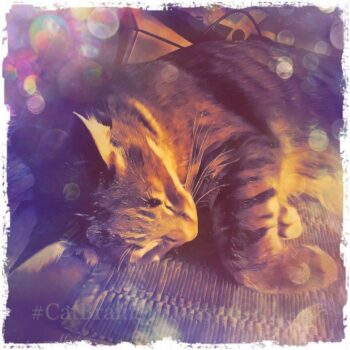 It would be so fine if we could ask our cat questions. One I’d like an answer to is, do cats have dreams? What do they dream about?

We can observe and then we can draw conclusions. However, we can’t get inside Kitty’s head to see for ourselves. We can, though, ask scientists what they have found. According to Matthew Wilson, associate professor of brain and cognitive sciences at M.I.T., feline dreams are not so different from ours.

The Cat Brain Has Similar Wiring To Ours

He explains that the hippocampus, which governs memory, has the same wiring in almost all vertebrates and mammals. This means that the electrical activity pattern in a sleeping cat’s brain is quite similar to that of a sleeping human.

Cats sleep a lot — from 16 to 18 hours a day. They, like us, experience Rapid Eye Movement (REM) sleep. In this stage of sleep, most dreaming occurs.

One researcher pointed out that you can compare a cat’s brain to a post office. If you go there at night, it is closed, but workers inside organize the mail, to make sure it gets delivered on time.

When your kitty sleeps, he recalls his day and organizes it categorically. He puts together his entire day so he can understand the whole story.

The cat must sleep a great deal to stay healthy. While he sleeps, he stores information from the day. The day may include some good stuff and some bad stuff.

An Example Of A Bad Dream

I saw an example of the bad stuff with my last cat, Pogo. He spent 7 1/2 months in a shelter. Being a very timid, easily scared cat, the shelter became a personal hell for him. During his stay there, he pulled all the fur off his stomach, in tracks down his legs, and off his ears.

Memories of that place did not leave him quickly. For the first few months he was with me, at night he would sit up, still asleep, and start licking at his stomach. I thought that, in his dream he must have thought he was back in the shelter.

I didn’t want to wake him suddenly, but just wanted to cause the dream to stop. So, I’d stroke him ever so gently and speak to him softly and soothingly. It must have awakened him just enough to stop the dream, because then he would return to a peaceful sleep.

Interesting — according to my research, older cats tend to spend less time in the REM sleep than young ones, as they don’t have as much new information to process. Apparently, the shelter experience had such a hold on Pogo’s thoughts that he couldn’t escape it quickly. I am so glad I could help remove those memories from his dreams!

Here is a YouTube video that gives a good explanation of the cat’s dream state.

Cats also can dream about you. They may recall a delicious dinner you gave them, or perhaps they will dream about a game the two of you played together. Just know that you are in your kitty’s dreams at times because you are an important part of his day.

Possibly cats will dream in color. They can see colors, just as we can, so it becomes likely that they have technicolor adventures in their sleep.

Though a cat may seem wide awake and alert one minute, he can easily slide back into rest and sleep the next. (Wish I could do that!)

Can A Cat Be Asleep And Awake At The Same Time?

According to the University of Arizona Center for Intergrative Medicine, clinical psychologist Rubin Naiman, Ph.D., “Cats reside in the boundary between night and day — between waking and sleep.” A cat is crepuscular, meaning they become most active at the twilight times of the evening and the morning.

For the rest of the time, they occupy a half-way land of sleep and wakefulness. It’s said that it is impossible to be simultaneously asleep and awake. However, the cat challenges this notion.

He can sleep while sitting up, and his sense of smell and hearing can remain active during sleep. That explains to me how a cat can hear a little critter in the house even though he sleeps. Sometimes my cat would bound out of bed after an intruder, even though he soundly slept just moments before.

Sometimes when you observe a cat sleeping, he appears to go on a hunt in his dreams. He might make movements that indicate he stalks something, or he pounces on prey. He might also move his head as if he watched something. Perhaps his dreams become more exciting than his day!

This one has too much advertising at the end, but you have my permission to skip that part.

I hope you enjoyed the videos about cats dreaming. One of the articles I read talks about a video of a kitten, asleep, apparently having a bad dream. The kitten trembles all over in fright in his dream.

The mother who sleeps next to him senses his distress, and in a motherly way, pulls the kitten against her. The kitten stops quivering, safe now that mother protects him. How sweet!

Cats can sleepwalk, but this action only happens in brain-damaged cats who have lesions on the brain stem. These cats, when awake, act normally, but when they go into REM sleep, they will act out their dreams.

Of course, kitty can have lots of happy dreams reliving that great hunt from the morning, or meeting a friend; perhaps enjoying a good meal, or even a special play-time with you. If it represents a part of the day’s activities, it could find its way into kitty’s dreams.

The electrical activity pattern in the brain of a sleeping cat proves to be very similar to that of a sleeping human. However, when we see twitching paws or tail, or perhaps twitching whiskers, and assume our cat is dreaming, we could be mistaken. According to researcher David Greene, “the most significant indication of dreaming is (an) utterly slack and relaxed condition.”

Yet, they do sometimes act out in their dreams. Pogo’s attempting to remove stomach hair in his sleep is an example. However their dream state manifests itself, it’s rather nice to know that the kitty sleeping next to you has his own nighttime dreamland adventures.