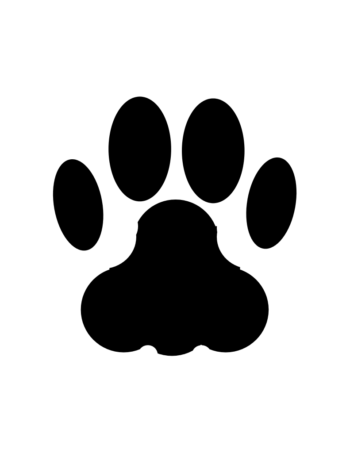 Strange though it may seem, your cat will most likely show preference for using one paw — either right or left — more than the other. Studies have been designed to test in order to learn the answer to this question: Do cats have a dominant paw?

The answer: Yes, they do. According to a new study, which you can find in the January issue of Animal Behavior, the cat shows a definite preference for using one paw over the other.

In this study, the cats received their testing in their own homes to minimize stress. Owners had to report information based on their cat’s spontaneous behavior when progressing through their day.

Researchers observed such things as, Did the cats use the right or left paw first when they went down indoor stairs? Did they step into the litter box with right or left paw first? Did they have a preference for sleeping on the left or right side? Owners collected data on such questions each day until they had collected 50 responses to each question.

The cats all had to reach for food inside a 3-tier apparatus.

Researchers discovered that male cats would more likely use their left paws, and females the right. As the study used all neutered cats, researchers showed surprise at this result; however, they felt it pointed more and more strongly to underlying differences found in the neural architecture of male and female animals.

Those studying this data may end up collecting information that may one day change the way we breed, raise, train, and use dogs and cats

In 1991, a study done at Ataturk University in Turkey showed the following percentages: Fifty per 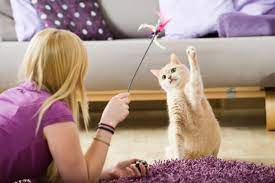 cent of cats tested turned out right pawed; 40% left-pawed and 10% ambidextrous. Though the study might be out-of-date, at least it offers percentages. By comparison, about 90% of humans fall into the right-handed category, with only 10% left-handed.

Try These Tests On Your Cat

Would you like to know whether you have a right-pawed or left-pawed cat? You can try these simple tests. If you do each test about 100 times, you should get an accurate answer.

1) If you teach your cat to shake or to do a high five, which paw does he use?

2) Fill a toy with a delicious treat. Which paw does the cat use to grab the toy?

3) Put something sticky on kitty’s nose. Which paw does he use to remove it?

4) Place a treat or piece of cheese somewhere just out of kitty’s reach — for example, under the sofa. Which paw does he use to try to retrieve it?

5) Dangle a toy over your cat’s head. Which paw does he use to bat at it?

6) Put a treat under a bowl, and watch which paw your pet uses to retrieve it.

Observe your cat and you will start to notice the pattern. The dominant paw usually starts the activity first. You can also think of your own ways to test your cat’s preference.

Here is a video showing how to test your cat:

Differences Noted Depending on the Dominant Paw

More than 30 tests of cats focused on paw preference, and in spite of the number of studies, the findings on these studies do not show consistent results. The number of left-pawed or right-pawed animals in these tests do not give a definitive answer. Some feel that the sex of the animal might represent a critical factor.

To counter the dilemma, in 2019 a study known as Oaklenburg et al, 2019, analyzed 32 different studies that included 1484 cats. Their results showed that cats do show paw preference.

This division shows that cats have as much of a chance for right-paw preference as for left-pawed, whereas humans have a 90% chance of preferring the right hand, and a 10% chance as left-handedness. 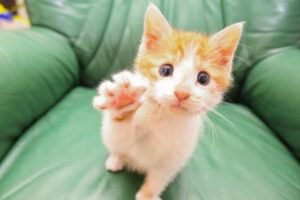 It’s interesting that humans also have a sex definition in which hand they prefer. Men have a slightly higher chance of being left-handed than women, though the difference between male and female comes out much stronger in cats.

What Does It Matter?

It could be useful to know which paw your cat uses more, as it can help you gauge the stress level of the cat. Left-pawed animals tend to show stronger fear responses. A cat that uses both paws with neither showing dominance may have poorer participation between the two spheres of the brain, and these animals also tend to show stronger fear responses.

The Journal of Comparative Psychology printed an article by McDowell and Colleagues (2016) on the relationship between lateralized motor behavior and temperament in cats.

Using a Feline Temperament Profile (FTP), the researchers assessed the cats’ responses. They found a significant relationship between temperament profile and paw preference. For example, ambilateral cats (those who use either paw equally) showed lower FTP scores than cats classified as either right- or left-pawed.

Owners saw these cats as being significantly less affection, obedient and friendly, and more aggressive. 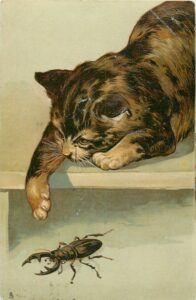 No significant differences showed between left- and right-pawed cats, with one exception. Owners reported their right-pawed cats acted significantly more playful than other cats. Stronger paw preferences also received a positive correlation from their owners for such traits as perception of confidence, affection and friendliness.

Test your cat as an interesting experiment, and see what you find. You might discover that which paw used most explains some things about your cat’s personality.