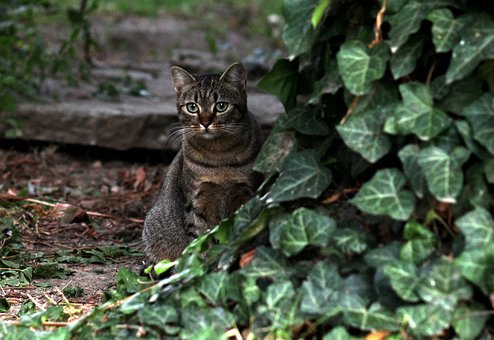 When bonding occurs between cat and human, there are many ways cats show love. Think of your own animal — can you recall behavior on the part of the cat that could indicate his love and caring? Your cantankerous cat lady has seen many examples of this inter-species bonding and love. Consider the following examples.

A Cat Story From My Youth

When I was a child, my father had a cat that considered their close relationship a working partnership. On our Connecticut property, my dad grew a couple of fields of corn. When the corn was harvested and the ears were collected, the stalks were bound into standing clusters, later picked up for silage. When my dad went out in the truck to gather the stalks, the cat always went along.

As each bundle was collected, the cat waited on the far side because mice ran out from under the corn stalks. The helper cat efficiently caught a great many of them

This mouse harvest my dad placed in a large coat pocket. On the way home, the cat sat next to him on the truck seat, regularly dipped his paw into that pocket, and pulled out a mousie snack. I suppose he considered these his pay for his assistance.

Playing Games With The Cat

When my daughter was four or five years old, she and our cat regularly played “hide-and-seek.” In this game, Sandi ran upstairs and hid in a clothes closet, closing the sliding door. The cat would come

upstairs, locate the closet, put his paws under the door, and slide it open. Then he raced downstairs to the kitchen, opened a cabinet door, and hid inside. Sandi would find him, and it would be her turn to run and hide.

Sandi left a hollow place in my life and in that of the cat, when she died at age six. For some weeks after her death, the cat would sit outside her bedroom door, missing her, and wanting to play with her again. In his own way, he mourned.

In Kodiak, we had a small-sized refrigerator in our kitchen, short enough that Uptight Cat could jump to the top of it. We had a friend living with us who had a bushy, curly beard. He would stand close to the refrigerator and the cat would wash his beard, trying his best to untangle and straighten it.

I took a visiting friend to Spruce Island, and, of course, the cats went along. This friend also had a curly, bushy beard. He was very tall, so Uptight Cat waited until he was lying down. Then the cat would sit on his chest and commence grooming yet another beard.

Escapades In The Outhouse

Sam Cat, my Spruce Island cat, loved to sit on your lap for regular petting sessions.  He learned that when you went to the outhouse,

you sometimes sat for extended periods of time. The cat would come in the outhouse, jump on your lap, and purr, “Scratch me! Pet me!” He knew he had a captive audience for a time and, of course, took advantage of this opportunity for some cat-human interaction.

Once a vet came to our village of Ouzinkie to give animals vaccinations. If you knew how to do so, you could get the vaccines and do the job yourself. A friend living at my place at the time said he knew how to give the shots, and since we had a dog and three cats, giving the shots at home seemed a much better option than trying to bring all those animals to the village.

So, we went home with the vaccines. The dog came first, and made no objection. Then we had to deal with the cats. Sam, my big black male, was no problem. However, by now my two little wild Siamese had watched the procedure and wanted nothing to do with it. We decided that Lou, being the shyest and wildest of the two, should go first. We put her in a pillowcase so we could control her movements.

Once her shot was given, only little Poo remained. She ran and hid; when we found her, she’d run to a new hiding place. During the chase, she was pursued by two humans and two cats. The cats must have felt that if they had to go through the process, she had to, as well. The four of us chased her from hiding place to hiding place, and couldn’t catch her. Then she disappeared. We couldn’t find her.

Finally, I happened to walk over to the bookshelf under the living room windows, and looked behind it. Clever Poo had found an

excellent hiding place. She climbed to the first shelf of books and flattened herself against the volumes. Looking under the shelves, we couldn’t see her. If I hadn’t looked over the top of the bookcase, we would

never have found her. To her dismay, she, too, got her shot.

Dances With Cats And Dogs

Once on Spruce island when I was having a bad day, I went for a short walk to cheer myself up. The cats and dog must have sensed my unhappiness, because they accompanied me, even though I didn’t call them.

When we returned, we went down to the beach. Here, we shared an unforgettable experience. We danced. On the sandy beach, we wove patterns and figure eights around each other. There was no plan, but somehow we all knew exactly where to walk next, weaving our dance in the sand. That experience was one of the most remarkable interactions I have ever had with my animals.

Cats Can Be Excellent Nurses

After I moved to Gustavus, I had to have knee replacement surgery, and was gone from home for ten days. When I returned, I used a walker when not in bed. For the first several days, I spent most of my time in bed, hooked up to an ice machine that circulated cold water through a rubber fitting over my knee.

The cat realized something was not right, and he did an excellent job of nursing. For the first three days and nights after I returned home, Carlos Cat slept under the covers, curled up next to my side. He got up only when I did, or for his meals and litter-box visits. After three days, he must have decided I was on the mend, as he returned to his other favorite nap spots.

During my years spent becoming the Cantankerous Cat Lady, my cats have cheered me immensely, often humoring me into a better mood. They have interacted with other family members or friends, letting us know they cared about us. The ways cats show love to us can be varied and unique, depending on the cat’s personality. Throughout my life, they have created warm nests in the far corners of my heart. They do their best to help care for their human family.

Please share with us. In the comments, tell us some ways you have experienced “cat love.” I’d love to read your stories, and I’m sure other visitors to this site would enjoy them as well.

4 thoughts on “The Many Ways Cats Show Love to Humans”