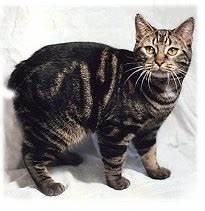 Are you acquainted with the tailless Manx cat? Here are some Manx cat facts you might find interesting.

The Manx cat got its name because many of the early ones were to be found on the Isle of Man. The breed is an ancient one, descendants of the African wild cat (F. silvestris lybica).

Even though this breed has been around for a long while, today many people would consider the lack of a tail as a deformity, rather than an attribute. If the cat were introduced into the cat fancy world today, it could very well be refused recognition as a breed.

Nevertheless, the Manx has been graced with a band of cat fanciers devoted to the development of the breed.

There are many legends about this cat’s origins. It is generally agreed that its original homeland was the Isle of Man, halfway between England and Ireland. However, there is not universal agreement on how this breed became tailless.

One story is that the Irish stole the cats’ tails for helmet plumes. Others say that the mother cats bit off their kittens’ tails to prevent that from happening.

It is said that the Manx was transported from Japan to the British Isles in ancient times by Phoenician traders. Another legend says that the Manx swam across from a ship in the Spanish Armada. An old ballad tells the story of the cat losing its tail when it was bitten 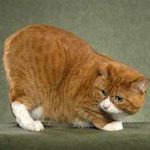 off by a dog, while the animals were sailing on the Ark.

A variation sounds like something that would happen to a cat: This story says the cat was the last to board the Ark, and Noah slammed the door on its tail.

Science, however, has its own theories about the Manx. Scientists believe that the cat’s taillessness is based on a mutant dominant gene. This mutation must have originally occurred a long time ago, as the breed was already well-established before any cat fancy organization. In fact, it is said that King Edward VII owned several Manx cats.

The breed is found in the early North American pedigree cat registers. Manx cats have been exhibited in cat shows as a distinctive breed since the late 1800s.

War years tend to cause the decline of pedigreed breeds, but they become reestablished after the war is over. Though early cats were bred from stock from the Isle of Man, as those cats dropped in number, more and more of the animals were bred in Britain and in North America.

One reason the breed is scarce is that litters are small, generally two, three, or four kittens. These small litters are a direct result of the Manx gene. Kittens inheriting the Manx gene from both parents die early in the womb. 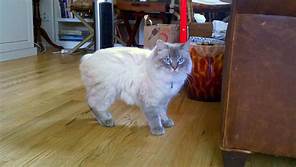 Often the breed shows a higher proportion of still births than other breeds. Part of the reason is that this gene can cause malformations in other parts of the body besides the tail.

It happens that a number of normal-tailed kittens will occur in a Manx litter because they inherit two genes for a normal tail. There are great variations among the Manx kittens, and in order to classify them, they have been divided into four groups:

1) Rumpys: These are the exhibition Manx cats. They are completely tailless. They may have a dimple at the base of the spine. When you run your hand down their rump it will not stop and you will feel no protuberance.

2) Rumpy-risers: These cats have a small number of tail vertebrae which form a small knob.

3) Stumpies or stubbies: This cat has a definite tail stump. It is usually movable but is often curved or kinked.

4) Longies: These Manx kittens have an almost normal tail, though shorter than that of a cat with a regular tail. Though these cats may well be registered as Manx, for exhibition purposes, the cat should be a rumpy.

When breeding these cats, the aim is for a totally rounded look. Not only should the rump be rounded, but also the head and the whole body. The back should be short and the cheeks full. With a short back and long hind legs, the Manx has a characteristic gait. It is bobbing and rabbit-like, and is called the “Manx hop.”

The superior Manx will have a double coat with a definite difference between the soft underhair and the glossier, coarser top coat. 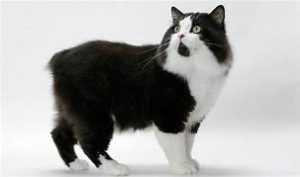 Colors or patterns can be of any variety. This cat has been exhibited in all patterns and color combinations, both in Europe and in North America.

Manx cats have a reputation for intelligence. They are easy to train. Even without a tail for balance, they are good hunters and tree-climbers. These unique cats are all very affectionate.

The reason not having a tail does not affect this cat’s balance is because balance is controlled by the inner ear.

In North America in the 1960s, breeders working with the Manx were delighted to discover long-haired kittens in some litters. It was decided to breed more like these, since they were unique, and to develop them into a separate breed.

This new breed was named Cymric (pronounced kumric), from Cymru, the Welsh name for Wales, since many of the people on the Isle of Man or in Wales are Celts. These tailless cats are quite attractive, with a smooth, medium-long coat and tufted ears and jowls.

Manx cats weigh, when full-grown, from eight to twelve pounds. They live from nine to thirteen years. Eye color and coat color cover a wide range of possibilities. Though medium-sized, this cat is stocky and heavily-boned. 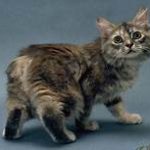 If you want a sweet cat, try this breed. She is quite placid and never seems to get very upset. She loves her family and being with people.

Don’t let your Manx cat eat too much. He will put on weight quite quickly. He likes to play, so keep him active to give him needed exercise.

Groom the cat daily, as it is a double coat. Brush regularly during shedding season, as the undercoat will build up if the brushing is neglected.

You can pretend your Manx cat is the family dog, as she loves to follow you around. You can also teach her to play a game of fetch. She will be checking out all your friends when they come to visit. Who needs a dog?

The Isle of Man uses the Manx cat as one of the island nation’s symbols. Their image appears on four commemorative coins. The breed also is used often on postage stamps. Since the cat is considered a representative feature of the Isle of Man, this feline’s image can be found on many tourist items as well. 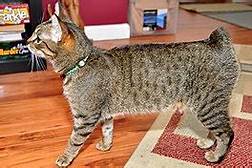