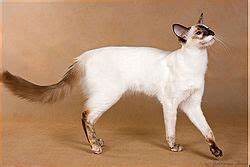 The lovely Balinese cat breed is beautiful to look at and is much like the Siamese in temperament. In fact, they are related. The Balinese cat is quite exotic in appearance, but does not come from Bali. Instead, this type of cat was developed by breeders in the United States.

The Name Came from the Cat’s Body Lines and Grace

This cat shares its color patterns and body lines with its Siamese relatives. One of the early breeders gave the cat its name because of its sleek body lines and its grace of movement. This movement is emphasized by the flow of the cat’s long, silky coat. Though not 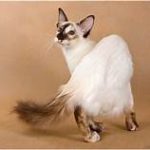 from Bali, the cat moved like a Balinese dancer.

Early Development of the Breed

For many years, long-haired kittens appeared in litters of certain Siamese bloodlines. In the early days before the breed was recognized, long-haired Siamese kittens were disqualified from showing as Siamese. These kittens, instead, were thought of as “faulty.” Then, in the 1940s, two breeders in the United States began to work toward gaining recognition for these cats. It was time to recognize them as a separate breed.

As the number of the cats grew, so did the number of admirers. Nevertheless, breed status was not given until 1970. At this time, the Cat Fancier’s Association, which is the largest North American cat association, admitted the Balinese into a championship competition.

When the cat was recognized, only four of the main Siamese cat colors were considered. Others were recognized later.

Do You Know This Cat’s Characteristics? 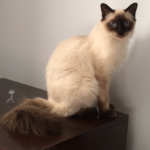 What does the ideal Balinese cat look like? It resembles a Siamese in every way except for its long coat. Its body will be fine-boned and sleek. It has a large, wedge-shaped head and stunning blue eyes, just like a Siamese.

The coat, though long, is not like the Persian and other related reeds. There is no woolly undercoat. The fur lies more flat along the body. The gorgeous tail is plumed. Though the coloring is similar to that of a Himalayan, the latter has the body type, coat, and temperament of the Persian. It is also similar to the Birman, but has no white paws.

How the Breed Developed

The first Balinese were developed from a kind of early Siamese that was popular early on at cat shows. It had a heavier body structure and a shorter head than today’s favorites. Therefore, some of today’s Balinese still include these earlier features.

One technique used by breeders to change this tendency is to outcross some Balinese to Siamese and then intermate the offspring. These cats produce a short-haired Siamese patterned kitten with a fuller, more plush coat. These are in fact a short-haired Balinese, which are a hybrid, genetically. 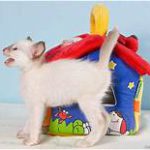 The cat show associations are filled with rules and regulations which determine which cats of a certain breed can be shown. In most North American associations, matings between Siamese and Balinese are the only ones permitted. Therefore, the Cat Fancier’s Association recognizes the Balinese in only the four basic Siamese point colors: Seal, blue, chocolate, and lilac.

The British version of the breed is a bit different. If you are seeking a pure-bred cat, select the proper breeding association in your country. From them you can learn more about the one you desire and its breeding characteristics.

The Balinese shares many characteristics with Siamese, as you might expect. They are acrobats who like to run and jump, or climb your curtains. They are all fond of riding on their owner’s shoulder. They are very affectionate and demand that this attention be returned.

They are sexually mature at a young age and are great parents. These cats raise their litters with great care.

The Balinese play for long periods of time without tiring. When they have a litter, it is usually three to four kittens. They also share the strident voice of the Siamese, though a bit mellower. They are easy to groom because the long coat, having no undercoat, is easier 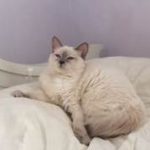 As you can see from the pictures in this post, the Balinese are among the most striking and elegant of all cat breeds.

How They Interact With Humans

Balinese cats are very fond of speaking to and interacting with humans. This breed is considered the most intelligent of all breeds. The animal is very good-natured and has a good disposition — no sulks or snarls from this kitty! It also has lots of energy.

They are thought to be able to sense the mood of their humans, and will stay close by if their person is feeling blue. Remember, it loves human interaction. Play with it and teach it to fetch, a game at which it excels.

Though the cat is well-suited for indoor life, it is good to remember that this cat loves to climb. Keep fragile things out of open 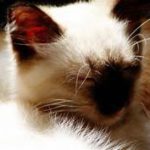 shelves. Silk curtains are impractical, though the cat will love climbing them.

As this breed is one of the few that produces less of the Fel D1 protein than many other cats, it causes fewer allergic reactions in people. It is also helpful that the coat, being single-layered with no undercoat, sheds only minimally. Among long-haired cats, its lack of shedding is a plus.

How Long Will Your Balinese Live?

These felines have been known to be fairly long-lived. Their life span is from 18 to 22 years. They are medium-sized cats, weighing typically from five to ten pounds. Though vocal, the voice is a bit softer than a Siamese.

If you liked this article, I would be very pleased if you left a comment at the bottom of the page. Thanks much! 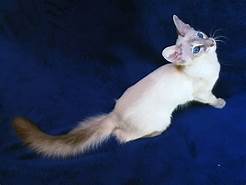