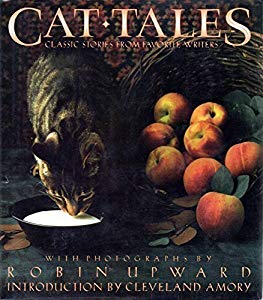 Greetings, readers! It’s time for another book summary by the literate cat, Lucinda. This time I will discuss just one story in a book of cat tales.

In fact, the book is called “Cat Tales, Classic Stories From Favorite Writers.” The book contains an introduction and ten stories by different writers.

The one I shall tell you about is written by Colette, a French author, and is called “The Long Cat.” My CCL (Cantankerous Cat Lady) says it is one of her favorite stories, so I will try to do it justice. If you read this tale, you will find it far funnier than my summary, I fear. I can see why the CCL likes it.

The story opens with a young girl talking to her mother about their black cat. His name is Babou, but he is nicknamed “the long cat” because he can stretch to an extraordinary length.

The mother remarks that she is not sure that he is really a cat, since he likes vegetables. He also loves strawberries, and poaches them from the neighbor’s garden.

The long cat has good taste, because he only selects the ripest and finest for his snacks.

He also liked melons and asparagus tips. CCL thought that very interesting, as her mother had a cat who loved cantaloupe and asparagus.

If the cat smelled the latter cooking, he came meowing to the kitchen, demanding his share.

Now, me, I’ll take good red meat, or perhaps a bite of tasty fish. There’s no accounting for some tastes.

A tall fence stood between the long cat’s yard and the neighbor’s, and for quite a distance this fence was covered with dense ivy. The ivy formed a leafy tunnel where the cat could pass through to get to the uncovered fence bordering the neighbor’s garden.

Once out in the open, the cat acted very casually until sure he was unobserved. Then he would jump down and graze in the garden.

On the wall, the author tells us she could watch many cat interactions. She remarked on their methods of doing battle. She said the male cats were more noise than action. They do fight, but mostly they yell insults at each other.

The female cat is a different story. She battles silently but with great enthusiasm. She gives no quarter until she chases off the intruder.

Division of labor is a principle here. It is the male cat who defends the territory, but the female defends home and family. If we females have kittens and they are threatened, we become ferocious in battle, and will defend our kittens to the death. Woe be it for any creature who poses a threat to a mother cat’s offspring. Talk about cattitude!

When it comes to amour, the French female cat is like others that I have met. She is eager to couple when the time is upon her, but afterward, she treats her lover as if he were a total stranger.

Two-leggeds could learn something from the female cat, when it comes to love. When no longer in the mood for coupling, the female treats the male with such disdain and contempt that he slinks away. Perhaps two-leggeds would be better off if they didn’t always attempt to turn every male-female encounter into a relationship. Perhaps they could learn to be a bit more discriminating.

At the end of their garden a small stream rushed by. The female cat had her kittens near this stream. When big enough, all her kittens except one were sent away. That last, a little tabby kitten was active 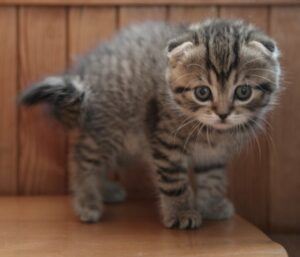 One day the kitten, when chasing flies by the river, fell in. The long cat, seeing this accident, threw himself into the water and swam after the kitten.

He finally caught up, grabbed the kitten by the scruff of the neck, turned around, and struggled against the current, carrying the kitten in his mouth.

Obviously an effort for him, the cat succeeded in getting the kitten back to the shore where he had fallen in, and laid him safely on the bank. The kitten began to cough and sneeze and wail, waking up the mother cat.

These French cats do know how to voice insults! When the mother arrived on the scene and began washing the river water off her baby, she thoroughly berated the long cat, asking what he had done to her son.

The long cat tries to explain, but the mother is having none of that, and won’t listen. Instead, she informs him in no uncertain terms to leave the scene or she will inflict serious damage to his body.

The poor long cat, who should have been the hero of this story, is chased away. The female cat never forgives him. Every time they meet, she hurls more insults his way.

This story is very amusing. I am amazed at the French cat’s ability to think of suitable insults. You need to read it for yourself to get the full benefit. I don’t want to spoil the story for you by giving you any more details.

I find it reassuring to learn that even foreign French cats still behave in the same ways as the cats I have met. I wonder how well they learn to understand the French language. If I were to travel there, I’d have no idea what those two-leggeds were saying.

That’s fine — as a cat, I’m not much into traveling anyway. I like to stay home and follow my familiar routine.

If you’d like to get your own copy of this book, the CCL has put it on here for you. It is available from Amazon. A hard-cover copy is not expensive, and there are also soft-cover editions that cost even less.

CCL says to remind you, that as an Amazon affiliate, she will earn a small commission from your purchase. In the case of these books, she says she will not receive much, but every little bit helps.

2 thoughts on “New Book Summary By The Literate Cat”