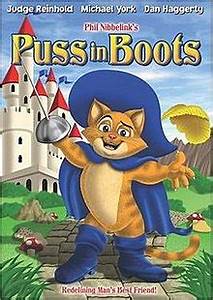 Hello, all. It’s Lucinda the literate cat with a new book summary for all of you. More of a fable than a long story, here is my Puss in Boots summary. This children’s story, written by Charles Perrault, is a long-time classic in young peoples’ literature.

This tale is the story of a miller who, on his death bed, leaves his meager possessions to his three sons. The eldest did well. He was given the mill. The middle son got the ass who was a strong animal and had done a lot of work for the miller.

The third son got only the cat, because that was all that was left. This young son was very upset. He said, “My brothers may make their living well enough just by joining their inheritance together, but what do I do with a cat? I could eat it and make a muff of its fur, but then I would die of hunger.”

In the days of this story, animals could talk, which is a good thing for the youngest son and the cat. Because he could speak, the cat was able to reassure his new owner that getting just the cat was not such a bad bargain.

The cat told the young two-legged not to be upset. He said, “Just give me a bag and 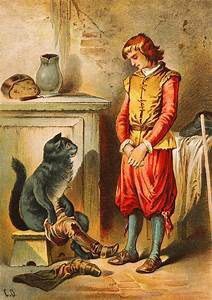 get a pair of boots made for me so I can cover rough terrain easier, and you shall see that ending with a cat is not such a bad bargain.”

For we cats are very clever, much more so than many two-leggeds give us credit for. We can trick the unwary and lure the unfortunate to their demise. Many of us are outstanding hunters and could perform the deeds of Puss in Boots with no problem.

The young boy knew there was some truth in what the cat said, as he had witnessed the cat playing cunning tricks on rats and mice to catch them.

So the cat got his boots.

I must ask here: Have you ever seen a cat wearing boots? I believe in the story the cat just wears boots on his hind legs, and walks upright. Some of the things these two-leggeds put in their stories! Is the reader supposed to believe these are things that actually happened? I guess not — that’s why it is called a fiction (defined untrue) story.

I suppose, since the cat had a plan to visit the king, he must have thought the boots would give him more credibility. Walking on his hind legs must have helped as well. I don’t understand, though, why the king would simply accept this strange creature, unlike any cat I’ve ever seen.

That cat had lots of tricks for catching prey. If you know cats, you have undoubtedly observed that they use a variety of tactics. Puss in Boots hung by his heels, or hid in the grain from the mill, or played dead. He had his ways!

With his boots, he walked upright and carried the bag in his forepaws. He put bran and sow thistle in his bag, and then visited a warren where there were lots of rabbits.

He laid the bag next to him, then laid down and played dead, waiting for some young, inexperienced rabbit to come investigate his bag.

Sure enough, soon a curious young rabbit entered the bag. Puss killed him quickly and took the bag to the palace to see the king. 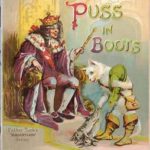 He said, “I have brought you, sir, a rabbit of the warren, which my noble lord, the Marquis of Carabas (the name Puss gave the young brother) has commanded me to present to your majesty from him.”

The king thanked the cat.

Next, Puss took his bag and hid among some standing corn. A couple of partridges ran in the bag and the cat quickly drew the strings. He took this gift to the king as well.

This practice went on for two or three months. Then, Puss told the third son that his fortune would be made if he went to the river to bathe on the day the king brought his daughter there to get some fresh air. And, by the way, she just happened to be the most beautiful princess in the world.

So the young son went to the river to bathe, The king and his daughter came along, and the cat cried, “Help, help! My Lord Marquis of Carabas is going to be drowned.”

Recognizing the cat, the king sent his guards to rescue the man. While they were

drawing him from the river, the cat told the king that someone had stolen his lord’s clothes (or course Puss had hidden them.)

The king immediately sent someone to run and fetch one of his best suits for the man. The young son looked so fine in the clothes, as he was a handsome man for starters, so the princess took a secret liking for him.

Maybe it’s just as well we can’t talk. You two-leggeds would never know if we told the truth or invented a story to fool you.

The king invited the young son to join them in the carriage. It was then that the princess really fell in love with the young man.

As they rode along, the clever Puss in Boots went ahead and told all the workers in the fields to tell the king that the lands they worked belonged to the Marquis of Carabas. He threatened to chop them up as small as herbs if they didn’t do so.

Now, why did all those people believe the cat? He must have been very convincing for them all to believe him. However, the workers did as the cat asked. I guess if they hadn’t, there wouldn’t be much of a story. Every time the king stopped the carriage 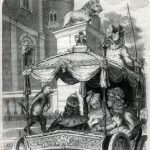 and asked whose fields these were, the workers would answer that they belonged to the Marquis of Carabas.

That cat was pretty remarkable. Where did he even learn that Marquis name? That’s not the kind of information that a cat usually has at the tip of his paws.

One thing in this story really puzzles me. How did the cat stay ahead of the carriage? We can run fast, but just for short periods of time. We are not meant for endurance races. Yet, the cat was always out in front. It amazes me how the story-teller can really bend the truth, yet the reader doesn’t even think about how untrue these stories are.

I think we cats are more realists. We’ll leave the vivid imagination to you two-leggeds.

Soon Puss came to a splendid castle. Of course, he was somehow well in front of the carriage by now. It must have been those boots. Puss knew that the castle was owned by a rich ogre, who was also the owner of the lands they had passed through.

I had to look up “ogre.” This one was a large and very ugly and mean creature who controlled all his workers with fear. I learned that ogres don’t really exist, but again 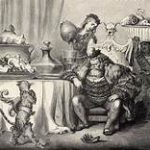 were invented for two-legged fables. As the cat knew about this creature, he knocked on the castle door and asked to see the ogre to pay his respects.

Brave cat. I wouldn’t put one whisker close to that place!

The ogre received him and asked him to sit down.

Then the cat said, “I’ve heard you are able to change yourself into any creature. For example, you could become a lion.”

The ogre said, “That is true. To prove it, I will now become a lion.”

When he did, Puss was very afraid and hid as best he could. I, too, would have been scared and would have hunted out the smallest corner. I would try to be invisible.

When the ogre returned to his normal form, the cat came out of hiding.

Then the cat said to the ogre, “I have also heard that you have the power to take on the shape of the smallest animals, for example, a rat or mouse. However, I take this to be impossible.”

“Impossible!” said the ogre. “You shall see presently.” Then he changed himself into a mouse. The cat pounced on him and ate him up.

Now, there is an example of cat craftiness. The cat used the ogre’s high opinion of himself to bring him down. Bravo, cat! I am sure if cats could really talk and there really was such an ogre, some cat would come up with that idea to destroy him.

Now, back to the king, the youngest son, the beautiful princess, and the carriage. When the king saw the great castle, he decided to stop and visit. Puss came running over the drawbridge, and invited him to enter.

Puss said, “Your Majesty, welcome to the castle of my Lord Marquis of Carabas.”

The king, impressed, wished to go inside. The Marquis gave his hand to the princess, and they followed the king. Entering the great hall, they found a magnificent banquet that the ogre had prepared for friends who were to visit him on that day.

The friends dared not enter because the king was there, so the whole party sat down and enjoyed the feast. After much eating and drinking, and while the Marquis and the princess were gazing soulfully at one another, the king said, “It will be owing only to yourself, if you are not to become my son-in-law.”

The Marquis, of course, accepted the honor, and married the princess that very day.

Do you two-leggeds understand why Puss went to such lengths to help the young son? Consider this: If you know much about us cats, you will know that we do not do things out of revenge or for any charitable reason. We do them because they seem like the best route for us to take.

Puss knew his welfare was tied to that of the youngest son, so he did what he did for selfish reasons. Of course, it all worked out to the young two-legged’s benefit, so everyone was happy.

These fables, often so far from the truth, are written not to transmit a true account, but to teach. The lesson in this story is about being resourceful and not giving up on something just because it is not to our liking. It is about using your head to figure out ways to success. It is about doing the best with what you have, and finding that sometimes that is more than enough.

If you would like to get a copy of this book for yourself or to give as a gift, here are both a hardcover and a paperback edition from Amazon for you to consider.  Just click on the image or the highlighted link and you will be taken to the store to make your purchase. Please be aware that, as an Amazon affiliate, I earn a small commission from your purchase.

Puss in Boots, by Charles Perrault

2 thoughts on “Lucinda Presents Her Puss in Boots Summary”