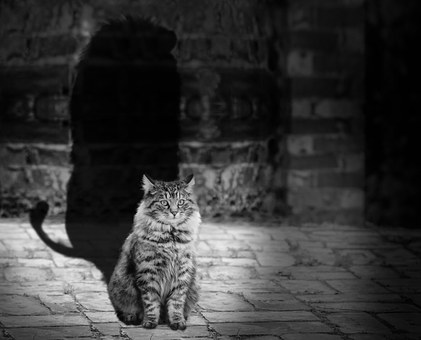 I am going to do something a bit different for this month. My CCL (a.k.a. Cantankerous Cat Lady) brought a book along on her California trip. After she read it, she realized it had many amazing cat stories that would be enjoyed both by cat lovers and to people not accustomed to cats.

So, of course she asked me to do a review. There are 91 stories in this book, so it may become the subject of a later post or two as well. For this issue, I will review four of the many stories included. The book is called Super Cats: True Tales of Extraordinary Felines. The two-legged who collected these stories for your reading pleasure is Ashley Morgan. A copy of the book will be available for purchase at the end of this review.

Now, here are the story summaries for you to enjoy. The first one is called “Gingaburger.”

This large ginger tomcat saved the life of Leslie Penni, when he woke her with a warning in the early morning hours.

Leslie Penni had fallen asleep in the early hours at her home in Hawke’s Bay, New Zealand. She awoke to hear a scratching sound at the door. She knew it must be her cousin’s cat, Gingaburger, who lived across the street.

She first thought about her paint job — she had just repainted the door. She found it surprising that the cat scratched at the door, as he usually knocked on her bedroom window. Then he would come in and sleep on her bed.

Leslie let Gingaburger in, as she worried about her paint job. The cat, however, ignored the bedroom, went right to the living room, and sat in front of a cupboard that contained Leslie’s water heater. He kept meowing and staring at the top of the cupboard.

Leslie said, “He was like a stubborn child, refusing to move.” She coaxed the cat back outside and returned to her bedroom.

Settling back in bed, she heard a fluttering noise coming from the corner of her room, where it backed up to the cupboard that had interested the cat.

Standing on a chair to look at top of the cupboard, she expected to see a rat. To her horror, she found glowing 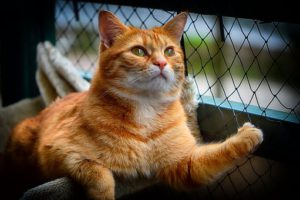 embers of a fire that had started atop the water heater. Though she had smoke alarms, they had not gone off. She called emergency services and left the house.

She realized that the cat had smelled the smoke and had tried to warn her. Louise writes, “If I had woken up any later, I might not be here. Gingaburger is a lovely cat and a bit of a rogue. If he was a man I’d marry him, red hair and all.”

All 91 of these stories,  provide excellent examples of the way in which we cats can help our two-legged companions. I believe this book offers important information in the ways in which cats can give value to two-legged society. I think too often we cats do not receive the credibility we deserve for the valuable part we play in helping out in two-legged affairs.

Though a shy ginger cat,  Sylvester’s shyness did not stop him from looking for help when he knew his owner, Patricia Kerr, faced danger.

Sylvester, a five-year-old part-Persian ginger cat, had been adopted by Patricia, a 90-year-old lady living alone in a small New Zealand town.

Usually, the cat would leave quickly when two-leggeds other than Patricia came along. He refused to be petted by anyone other than his Patricia. So, it surprised the neighbors a great deal to open their door one morning to Sylvester, meowing loudly.

The neighbors, Shirley and Monte Mason, went to Patricia’s house and rang the bell. They received no answer. They thought perhaps Patricia had gone shopping or for a walk.

As the neighbors had a family reunion to attend, they checked the cat for signs of injury. Finding none, they decided to call Patricia when they returned. 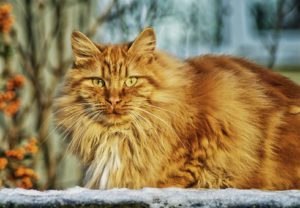 Upon their return, they discovered Sylvester still hanging around the door and being unusually vocal. The Masons also noted that Patricia’s collection bins had not been put out. Something must be wrong. They rang the doorbell and called on the phone. No answer. Now very worried, they called Emergency Services.

When the police entered the house, they found Patricia trapped in her bath. The cold water brought on hypothermia. The police arrived just in time to save her life. They rushed her to the hospital where she soon made a full recovery.

During the rescue, Sylvester again became the shy cat, as he must have realized he’d finished his job and Patricia was safe. The Masons, sure that Sylvester had known Patricia was in trouble,  had gone to seek help. He received the credit for saving her life.

Some members of my cat society bond with one two-legged and remain shy and nervous around all others. It is hard for some of us to conquer our nervousness around strangers.

The difficulty of overcoming this fear or nervousness makes the story of Sylvester so much more remarkable. Because of his concern for his two-legged, he did the only thing he thought might help — conquered his fear and let the neighbors know he needed help from them. Because of his insistence, they finally paid attention to him and saved his two-legged’s life.

Those who become our families would do well to pay attention when we issue warnings of danger. We do our best to let you know.

In Obninsk, in the Kaluga region of Russia, the temperature falls below zero regularly.

One day, when Nadezhda Makhovikova heard a meowing coming from the stairwell, she went to investigate. The spot was the home to a local long-haired tabby stray named Masha.

Nadezhda thought the cat might be injured. When she checked, she found the cat curled around a baby, asleep in a cardboard box.

The child, perhaps two to three months old, had been in the stairwell in the freezing temperature for some hours. Masha heard the child’s cries. The cat climbed in the box with the baby, licking the baby’s face and warming him with her long fur.

The paramedic, Vera Ivanina, arrived to take the baby to the hospital. She says that Masha ran after them, meowing, worried about where they were taking him.

Masha, already a favorite among the residents, received awards of treats and food for her heroic effort, after her rescue of the baby. Examiners found the baby to be in perfect health. Masha’s protective instincts saved his life that night.

You two-leggeds need to learn about the many ways we can be of help. We care about the two-leggeds in our lives, and feel it is our duty to aid and protect when we can.

Cats in general deserve more recognition than they get for their many talents. They can sense things with their heightened awareness that the two-leggeds cannot detect. If you could more fully understand how much cats can do, they could help even more. Perhaps you readers can spearhead a campaign for greater cat understanding.

My CCL asked me to include a little of the information from a particular page in this book of cat stories. The page is called “Clever Kitty,”

Cats are smart. Consider this remarkable fact: A cat’s brain has 1,000 times more data storage than an iPad. 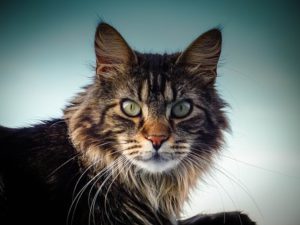 It also operates a million times faster. Though dogs are often considered the smartest domestic pet, your cat is just as intelligent but in different way.

The cerebral cortex of a cat contains about twice as many neurons as that of a dog. Not only that, but cats have longer-lasting memories.

Scientists have also found some startling similarities between a human brain and the feline brain. In the temporal, occipital, frontal and parietal lobes of their cerebral cortex, these cats share a similar brain structure to us. The four lobes are all each connected in the same way as the human brain.

The part of the cat’s brain that deals with emotions also works in the same way as a human brain.

Amazing! I always knew we cats were smart four-leggeds, but now I have written evidence to back it up!

One last story from the book. Here you go…

Prince Smokey, a four-year-old cat lives with his owner, Tina, in Lichfield, Staffordshire.

Tina believes she owes her life to the cat. She has dealt with some health problems, and has always been comforted by the cat, who has stayed close to her side.

In 2015, Tina began to experience mild chest pains. At first, she thought they came from indigestion. However, a change in her cat’s behavior made her wonder if she were correct.

“Prince Smokey, a very loving cat, also seems to know when I am not feeling well…he just wouldn’t leave me alone. If I sat down, he would start pawing at my chest, looking at me and chirruping. His behavior was quite bizarre, and it really made me think. He seemed to sense something was not right and couldn’t relax.”

When Tina visited her doctor, he sent her straight to the hospital. Tests showed that she had a stenosis in the left artery of her heart. She needed immediate surgery to prevent a heart attack.

“After I got home, Prince Smokey returned to his usual self. I have no doubt that he had a sixth sense and knew something wasn’t right. Without his unusual behavior, I wouldn’t have followed it up with the doctor, and who knows what could have happened. He is my little angel.” 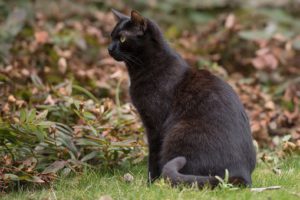 Prince Smokey could be seen as obviously very close to his owner. His behavior gives a great example of how insightful a cat can be.

These stories are so good for you two-leggeds to read. I believe you have not fully recognized our value. These 91 stories make up just a few of all the stories that must be out there about cats helping their two-leggeds with many things.

Health issues in themselves are very important. It would be good if more two-leggeds became aware of how valuable their cat-friend might be to them in times of sickness, injury, or danger. Lets hear it for cats! May they receive the recognition they deserve.

If you would like to purchase a copy of this amazing book for yourselves, you can get it at Amazon. Just click on the image or on the highlighted title and you will be taken to the Amazon page where you can purchase this book. Please note: I will receive a small commission if you purchase.