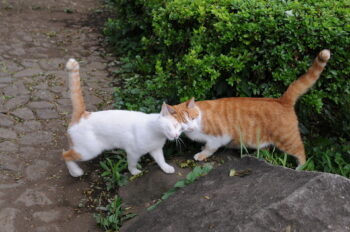 Hello again, two-legged readers, from Lucinda the literate cat. It’s time I did a little work around here. My CCL (Cantankerous Cat Lady) says it’s my turn to write.  Anyway, it is time I did another Cat Behavior Solutions column. This week I’ll be answering a letter from our mailbox from a Ms. Beatrice Collins. Here’s what she has to say:

Lucinda, I am concerned about my cat. I work long hours and she has to stay home alone a lot. I believe it makes her unhappy, because when I come home, she is very clingy. She does not want to let me out of her sight.

What can I do to help her? Would getting her a companion cat be a good solution? 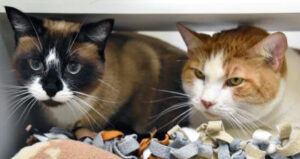 Lucinda’s answer: Yes, you do have a problem. Most likely, your cat does have some abandonment issues. Cats who spend hours alone, locked in a house, often do. CCL talks about a post she read where a woman left a tape recorder running when she left home.

Her cat cried and yowled as soon as the woman left the house. When she came home and listened to the recording, she felt really bad for her poor kitty.

You need to provide things that will keep your cat from getting bored. She needs activities to occupy her mind when you go to work.

One suggestion; Get her a cat tree with lots of climb and play options. Or, get her such toys as a puzzle feeder, or other games that involve the cat in the activity of retrieving food. We cats always seem to find food a good enticement.

As far as getting another cat — It could take care of your problem, depending on the cat you select. However, be aware of how important territory is to us. If I had to share my home with a stranger, especially if I did not give permission first, here’s my possible reaction:

What? You are bringing a stranger to share the home with me? But this is MY territory. How dare you bring in some stray cat because you think I need company. Why, that’s as bad as you two-leggeds, when you believed in arranged marriages. You paired the bride and groom with your choice of partner, giving the two new mates no chance to have a say in the matter. How controlling!

I will show my feelings about this newcomer. I will hiss and swat and yell at her. How dare she think she can invade my home turf? Who does she think she is?

My two-legged has left a blanket on my bed that has her smell on it. Oh, well, it is a nice blanket, so I’ll use it. Now that I’m getting more used to this idea of a newcomer, I can tell that she doesn’t smell too bad.

It’s a good thing she doesn’t stink, because she has walked all over the house, leaving her scent on everything! Well, in the process, she will certainly learn how I smell.

My two-legged spends lots of time with both of us. At least she has not neglected me for this new cat. Then my tail would really be out of joint.

Now she’s playing with both of us, with a bright feather. Well, I must say, I find this fun. Perhaps I can impress the new cat with my speed and agility.

As you can see, Ms. Collins, two cats placed together will gradually get used to each other and in the best-case scenario, will become good friends. Of course, you could make a poor choice and your new cat turns into the Cat from Hell. Well, you can always take her back where you got her, I guess.

Keep in mind that, if you have a mature cat, you might choose a kitten for the new one. Just be watchful at first, so the older cat does not hurt the kitten. Sometimes, though, the adjustment between the two might happen faster.

If the new cat has any understanding of the situation, she will know to lie low until the resident cat finally accepts her. Then all will be well.

CCL tells of her last cat, Carlos, who was sent to another home before joining CCL. The woman got Carlos because she thought her cat was lonesome. When Carlos arrived, her cat growled, hissed, swatted — did anything he could to let Carlos know he didn’t belong there.

Carlos did nothing to defend himself, so finally the woman felt so sorry for him she took him back to the shelter.

Of course Carlos didn’t defend himself. He realized that he had entered the territory of another cat, and he knew the resident cat did not want him there. He honored the other cat’s wishes, but could not change things by himself.

CCL says she is very glad the woman returned Carlos to the shelter, as he became a superior partner and companion for her.

Now we will look at the second letter, this one from a cat named Sunbeam. This cat has been placed in a home with another cat, and the resident cat has become furious at this intrusion. Let’s hear what this letter says:

Lucinda, have you ever met a more unhappy cat than I? When someone came to the animal shelter and chose me, I thought it would be good to go to a new home. But, when we got there, I found another cat already lived there.

That cat has done his best to make my life miserable in the few days I’ve lived at his house. He does not want any other creature in his territory. I am afraid he will beat me up and injure me in some way. What can I do?

I’d run away if I could escape, but there seems no way I can get out of here. Is this how life is to continue? Abuse heaped upon abuse?

Lucinda’s answer: I truly understand your feelings, and would like to help you. I would guess that the situation will not change, so you must either adapt or continue to exist as a most unhappy cat.

The only other option: You must change. See what you can do to lessen the other cat’s hostility. In time, he, too, will become calmer. You must stay out of his way until this change takes place.

Patience, Sunbeam. Once the other cat accepts that he can’t change things, he may decide that you might not be so bad. After all, your two-legged did not bring in another cat to create stress for her first cat, but so that you both would have a companion when the two-legged goes to work. 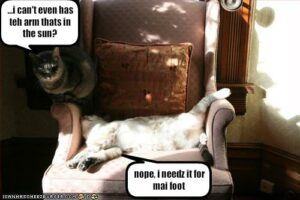 Until the emotional storm has settled down, there’s not much chance for a solution. However, eventually the other cat will see that you pose no threat in his life. Perhaps after some shared experience, such as a good play session, you will become more used to each other and more ready to become friends.

After all, bringing a newcomer into the family creates a change for the whole household. However, if you can find a way to wait it out, you will end up with a close companion and neither of you need ever fear abandonment again, because you will always have each other.

Sometimes the pathway to solution becomes quite rocky, but when you finally solve the problem, life can prove better than before.