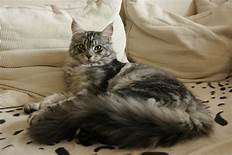 This post furnishes information that is all about Maine Coon cats. One of the oldest natural North American breeds, the Maine Coon, or Maine Cat, is believed to be a native of Maine. This beautiful cat is most likely the closest breed to the Norwegian Forest Cat.

What Were the Origins of Maine Coon Cats?

Cats seem to attract interesting stories as to their origins. One popular legend concerning the Maine Cat’s origin is that it was a result of matings between semi-wild cats and raccoons. Though biologically impossible, the bushy tail and the commonest raccoon-like coloring brought about the adoption of the name Maine Coon.

Another story says that Marie Antoinette, when planning an escape during the French Revolution, sent her cats to be cared for in the United States until she could find them another home. These became Maine Coon cats.

Development of the Breed

Most breeders of today believe that the Maine Coon breed originated when early Angoras were crossed with short-haired domestic cats.

The breed, well-established more than a century ago, have become a hardy, 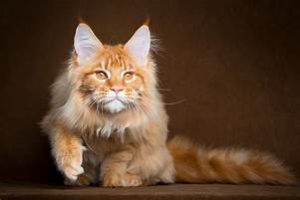 handsome domestic breed. They are the farmer’s friend, as they are good at keeping down the mouse population. They’ve become rugged of coat and build. They are tough enough to withstand harsh Northeastern winters.

Physically, they have also become one of the largest breeds. Males are relatively tall and long-bodied; females are a big smaller. Their coat is long and flowing, and rather heavy and shaggy. This coat is shorter on the shoulders and longer on the body and tail. They have a well-developed ruff that is set off by a longish, square-muzzled head.

The first mention of the breed in cat literature was recorded in 1861. This was a black and white Maine Coon known as Captain Jenks of the Horse Marines. Maine Coons were shown in early shows, but then they became less common in shows as the Persians from British cat breeders were introduced.

In the northeastern states, they remained very popular as household pets. Then, in the early 1950s, cat fanciers began once more to pay attention to them, show them, and record their pedigrees.

During this long period, a small core of breeders persisted with the breed. Then, when the pedigree records were stabilized, they again became popular. In 1967 they were accepted by most cat associations, but the breed was not recognized by the CFA until 1976. A number of these cats are also bred in Western Germany.

Maine Coon Cat Has the Original Coat of Many Colors

There has never been a restriction of any kind on patterns and colors acceptable in Maine Coons. The only exception are chocolate, lavender, and the Siamese pattern. The result has been a wide range of patterns and colors in these cats. However, the brown tabby remains the most popular.

Pedigree breeders have worked hard to perfect this coat into the rich, warm brown that is so popular. The coat is smooth yet shaggy, which allows the cat to endure a harsh climate. With its amiable personality, it has adapted to various environments.

Eye colors can be green, gold and copper to blue. Odd colors are also acceptable and there is no show restriction on any combination of coat and eye color.

The Maine Coon is much different in appearance from the Persian. The head is 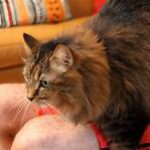 much larger, with high cheekbones. The ears are large, well-tufted and wide at the base. The cat has a medium-long neck, the torso is large, and the chest broad. The legs are considerably longer than those of a Persian cat. The tail is also longer.

These cats develop slowly. They might be four years old before they reach their full size. Many people consider this cat to be the ideal pet. They have a clown-like personality, with amusing habits and tricks. Their coats are easy to groom.

Maine Coon litters are usually small, with four kittens the most you can expect. Two or three are more usual. Because of the various cat colors and patterns, it is likely that each kitten in the litter could be different.

Wikipedia tells us that this cat has a nickname of the “Gentle Giant” because of its size and sociable nature. It is said to be quite intelligent, and it has a playful personality. It is often cited as having “dog-like characteristics.”

One folktale tells us about Captain Charles Coon, an English seafarer who kept long-haired cats on his ships. When Coon’s ships would anchor in New England ports, these cats would exit the ship and mate with local ferals. When long-haired kittens began appearing in the local litters, folks would say they were one of “Coon’s cats.”

Maine Coon cats’ coats are easy to maintain, compared to other long-haired breeds. 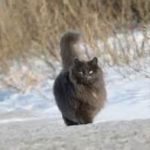 Due to a light-density undercoat, their coat is pretty much self-maintaining. The coat is thicker in winter and thinner in summer.

They adapt well to cold winter climates because of physical factors. Their dense, water-resistant fur is longer and shaggier on their underside and rear. This extra fur adds more protection when they are walking or sitting on top of wet surfaces such as snow or ice. 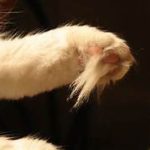 Their large paws facilitate walking on snow and can be compared to snowshoes. Large tufts of fur growing between their toes act as toe warmers. They also aid in walking on snow, as this fur gives the paws additional structure without adding extra weight.

Their ears are heavily furred, with extra long tufts growing from inside. These tufts help keep the ears warm.

Many Maine Coons are polydactyl, which means they have one or more extra toes on their feet. However, this trait has been almost eradicated, since polydactyls were automatically disqualified in show regulations.

The Maine Coon is generally known for having a gentle disposition. Therefore, they are more relaxed around dogs and children. They are playful throughout their life. They are affectionate. Many have a fascination with water. They are very vocal cats, yowling, howling, chirruping and trilling, and making other loud cat statements.

The average lifespan of a Maine Coon is 12.5 years. They are generally healthy and hardy.

The information from the first part of this article comes from The Book of the Cat by Michael Wright and Sally Walters. If you would like to learn more about this book or obtain your own copy, follow this link. If you have a Maine Coon family member at your house, tell us about your pet in the comments below.

8 thoughts on “Learn All About Maine Coon Cats”