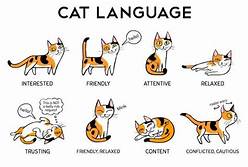 Have you ever wondered, without speech, how do cats communicate? Though they don’t talk, they do seem to be able to make their wishes known to others of their kind.

After Lucinda’s column on cat philosophy a few days ago, I started thinking about the ways cats get their ideas across. What I realized was that cats do not need speech. They can get along fine without it.

These four-leggeds have such a simple lifestyle. They are beautifully engineered to do fine without talking. They enter the

world with all the communication tools they need. They just have to learn from their mothers how to use those tools.

The Nose Knows All 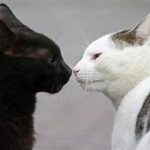 Cats use their nose to smell food, animals in heat, territory boundaries, and dangers in the environment. They have two organs on the roof of their mouth called Jacobsen’s Organs. The cat opens his mouth slightly and the second scent sensors in his mouth increase his smell sense.

Your feline will leave his scent everywhere in what he considers his territory, because that is the way he lets visitors know this space is taken. Cats are very protective of their home base.

The Eyes Have It

Observe kitty’s eyes, and you will decode more of his communication system. If the cat’s eyes are wide open, he’s most likely alert and trusting. Slit eyes indicate fear or aggression. A slit pupil indicates fear, anger or excitement.

Do you know if you have received a kitty kiss? When your cat is relaxed and trusting, if he looks at you and gives

a slow blink, that’s the equivalent of a kitty kiss. Try giving one back to him. Look at him and very slowly lower and raise your eyelids. Now watch — perhaps he will “kiss” you back.

A Tale Could Be Told By The Cat’s Tail

All parts of the cat’s body are hooked into his communication system. Look at his tail. What can you learn from it? If it is swishing, the type of movement will indicate what the cat is trying to say. If it is moving rapidly from side to side, he is probably irritated or downright angry. If it is slowly moving from side to side, it might indicate that he is puzzled or perhaps mildly annoyed.

When he greets you, if the tail is quivering and he’s purring, he may be telling you he’s glad to see you. When he wraps his tail around you or another animal, it’s the equivalent of putting his arm around you. When the tail is straight up in the air, it indicates happiness or contentment.

If the tail is wagging very fast or thumping the ground, the cat may be preparing to attack. If it’s tucked between his legs, he is probably fearful. When he is in fighting mode, the tail hair will stand on end and that tail will become an awesome signal that war has been declared.

Whiskers Have Their Job

The whiskers play their role in communication. They are sensitive instruments, fulfilling some of the roles our fingers fill. Never cut a cat’s whiskers, as the animal could become very disoriented. They tell him if he can fit 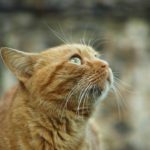 through a space. As they are sensory tools, they help him see in the dark, or steer around objects in the way, or to locate prey.

The Ears Are Excellent

A cat’s ears can be important, as the cat can hear sounds at lower frequencies and higher frequencies than humans. Their ears are designed to be self-cleaning, so no need to clean them yourself. In fact, you can cause damage to the ear.

The position of the cat’s ears can indicate many emotions. For example, if the cat is annoyed, the ears may be lowered and turned sideways. If your feline is furious or terrified, in either case the ears would lie flat against the head.

If The Fur Stands On End, Watch Out!

Yes, it is fur real…if the kitty’s fur is standing on end, he is mad as all get out! The cat might be angry, or it may be frightened, in which case it will fluff out to a larger size to try to intimidate an aggressor.

The condition of the fur might also be an indication of the cat’s overall health. If the coat is dull or greasy, there may be a problem. Or, the cat could wash its fur excessively and cause it to come out. This condition is usually related to stress in a nervous cat, or perhaps allergies.

All the body parts of a cat can be used in some way for communication. Look at everything about the cat to figure out the message. Cats also use their whole body for communication. Does your kitty ever roll over and show her belly? You’d think she wants a belly rub, but if you try it you may end up with four legs wrapped around your arm.

She is just showing that she is happy and content. Scratch her ears, maybe, but stay away from the tummy. 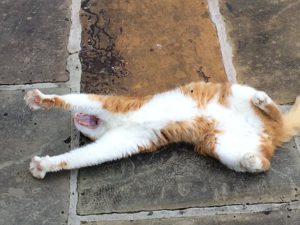 Cats also do a luxurious stretch that I compare to a yoga move. They get the whole body into the act, and really stretch everything..

I believe that animals communicate telepathically in some way, perhaps transmitting images, or at the very least, energy. Once when I was stressed because I thought I was having a heart attack, my cat came racing across three yards to reach the house. I think he sensed my stress.

When I lived in Kodiak, I had three black cats. Very often they would lie in a line of three, about six feet of space between them. Why? Were they transferring energy in some way?

I believe my Carlos cat was trying to teach me this telepathic communication, because several times I went to the door because I thought he wanted in, and he would be standing outside the door, waiting.

Once when I added a housemate that had a cat, we tried to keep the cats apart, because they had not been too friendly at their first meeting. Of course, my friend’s cat was in a carrier, and feeling threatened.

A couple days after my friend’s arrival, we went off somewhere. When we got back, the door to the guest bedroom was open and the two cats were inside, seated, not making a sound, just staring at each other. Were they having a conversation? The two became good friends, and often hunted in the river bed together.

Cats do not stress over not having language. In their world, they have everything they need.

We learn that cats meow at humans, but not at each other. Mother cats will talk to their kittens with some sounds, but other than that, they just meow at us. It is my belief that they consider meowing asking for something, and because they don’t like asking for anything, they save their meows for use only on humans who don’t understand them.

What are your theories about how cats communicate? Please leave some comments at the end of this article to let us know your ideas.