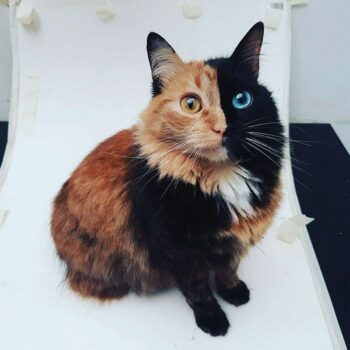 Physical characteristics of any cat are determined by its genetic makeup. Biologists might talk about cat genotypes. These include such things as body shape, length and curliness of the coat, the color of the coat, whether male or female, etc.

The Make-up Of The Gene Pool

When an egg is fertilized by a sperm during reproduction, each one contributes one set of genes to the offspring’s genotypes.

Chromosomes, made up of molecules of DNA, each contain a huge number of genes. In the cat there are 38 chromosomes (which is eight fewer than in humans) in each cell. Half of these come from each parent. Because the mother and father each have a different genotype, the kitten will have a selection of genes different from their parents but made up of elements of each.

How Characteristics Are Formed

The chromosomes line up in matched pairs. These determine which of the physical or other characteristics of the parents will be passed on to the kittens.

The sex chromosomes form an exception, because here the chromosomes may or may not match. 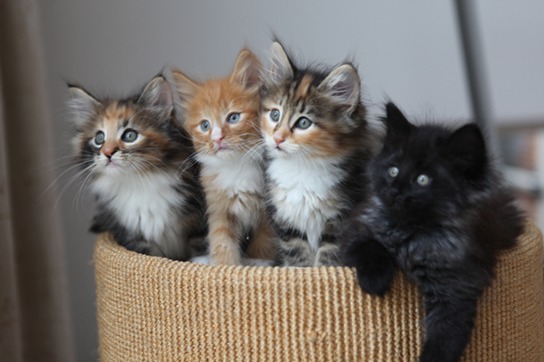 There cannot be two Ys, as the female just has an X chromosome. Therefore, it’s always the father who determines whether the offspring is male or female, just as in humans.

The remaining chromosomes which are matched have genes arranged along them in a particular order. Thus the genes for a specific physical feature are in pairs called “alleles.” The kitten will receive just one of the genes in each allele.

Say we are looking at hair length. If the gene from the father and the one from the mother passed along from the allele are identical, and are for short hair, the kitten will have short hair. If this is the case, the allele is said to be homozygous for hair length.

Unmatched alleles have genes that are either dominant or recessive. In the above hair-length example, short hair and long hair results in short hair, because the short hair gene is said to be dominant.

This process works for all hereditary characteristics. Some genes are dominant and some recessive, and these all play a role in determining the kitten’s genetic makeup.

A recessive gene may be passed on to a new generation, and if one of such kittens grows up and mates with a cat who also has the same recessive gene, that characteristic will appear. If both parents had the recessive gene for long hair, then after this mating, their kittens would have long hair.

This phenomenon explains why certain physical characteristics may disappear for a generation and then reappear in a new generation.

Heredity is the passing on of characteristics from one generation to the next one. Now things can get complicated. Dominant genes are linked together and tend to be inherited together because of this linkage.

Here is an example: Tortoiseshell cats have coat color genes that are part of the make-up of their skin colors. The genes for red and black are found on X chromosomes, so the female cats can carry genes for both orange (red) and black.

However, the male tortie can inherit either the red or the black, but not both, because they only 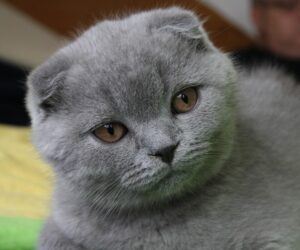 Mutations are what account for such a wide variety of body types, coat colors and length, as well as other physical characteristics. Mutations occur when they undergo changes when being passed from one generation to the next.

Mutations account for so may different-looking cats. If there were no mutations, all domestic cats would have just a couple of variations in appearance from one to the next.

At first, all cats were short-haired tabbies. Over generations, rogue genes have caused all the variations from that original cat to today.

Once genes have “gone wrong” over the generations, they continue into future generations.

These changes become the basis for evolution. Though the tabby of today is similar to the African or European wild cat, it is not genetically identical. Today’s cat is much different from the animal that first met people about 5,000 years ago.

What Are The Effects Of Mutation?

Sometimes the mutation becomes so well-established that the effects are simply accepted. An example is the “dilute” black that produces blue cats. This mutation is now so established that it is commonplace. We accept the “blue” cat just as we do the tabby, and don’t think about the number of genetic steps that have turned the tabby into a blue. 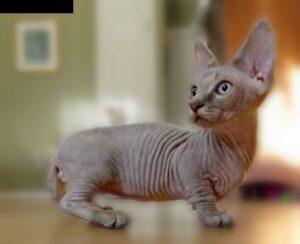 When the Scottish Fold first appeared, it signaled a spectacularly different result. The Sphynx (almost hairless cats) and the Rex (curly coat), if they had been left to themselves, would have probably disappeared.

However, breeders noticed these cats, and have kept them from disappearing by selective breeding from the original mutation.

Mutations Due To Environment

These mutations are caused by such things as exposure to various forms of radiation or other environmental hazards. These often die out, as the kittens often die at birth or they are born sterile.

Some genetic defects arise because a gene may carry added liability. Such is the case with the dominant white gene which gives cats an all-white coat. This coat color is also linked to a tendency toward deafness. This trait is most common in white cats with blue eyes.

The condition is from a fault in the inner ear, beginning shortly after birth. Unfortunately, the condition cannot be treated. This deafness gives the kitten problems growing up, because it cannot hear its mother. A female should not be bred if has this condition because she can’t hear her kittens, and they end up being neglected.

The cat can compensate to some extent for this deafness, as it will develop ultra-sensitive paws.

While the cat can’t hear you come into the room, he can feel you through the vibration in the floor.

The Siamese has an unfortunate genetic trait that can carry a fault in the narrow connection between the eyes and the brain. This fault results in a blurred image and difficulty judging distance.

Because of this problem, some Siamese develop a squint. Not good in show Siamese, but they still become pets. Just be aware that such a cat spends his whole life at a disadvantage.

There are two ways in which cat breeders make use of genetics. If they are trying to breed as close as possible to the standards set down by cat fancy organizations, they are very careful not to introduce genetic variations into the breeding.

However, sometimes their carefulness doesn’t account for recessive genes that appear spontaneously several generations later. Though the practice is to register cats with their history of registered ancestors going back at least four generations, it is not foolproof.

Thus, breeders often have kittens for sale which are in perfect health, but for some reason are not up to show standards.

Some breeders combine and recombine genes to develop certain characteristics. Though some of these efforts have not been successful, some have resulted in “new” breeds being admitted to registering bodies.

These days the cat fancy has built up a great understanding of the nature of domestic cats as a species. They are alert to the dangers of distorting this genetic nature into something beyond what is right for the cat.

Information for this article came from “The Encyclopedia of the Cat” by Michael Pollard. You can purchase it here it you’d like:

This book is for sale in Amazon.  As an Amazon affiliate, I may earn a small commission from your purchase.