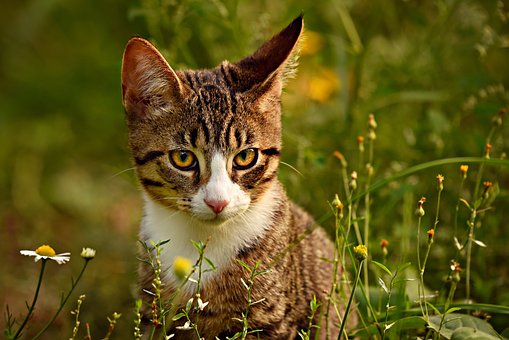 When researching tabby cats, the first thing I learned was that tabbies are not a breed. The name refers to the pattern of the cat’s coat. So what are tabby cat characteristics?

Tabbies are the basic type of cat. This cat is the descendant of the wild type, the one from which all others evolved.

There are four tabby patterns that are genetically distinct.

The mackerel, or tiger-striped tabby carries the pattern of the true wild type. It is not the blotched pattern, which is the most familiar to most of us. Both the spotted and the Abyssinians are genetically tabby as well. Every domestic cat in existence has a little tabby in them, even if they don’t have the coat color.

The tabby color is actually made up from two patterns. One of these is superimposed over the other. The two patterns are governed by two sets of genes.

The underneath pattern is called “agouti.” It is a universal grey camouflage pattern that is found in the large majority of mammals. The agouti is most notable in the rabbit.

The tabby hairs have a bluish base and black tip. These are separated by yellow banding. Because the 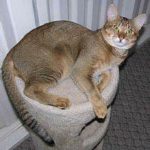 hairs slope backwards, they produce a freckled grayish color between the tabby’s stripes.

The cat needs only one agouti gene to give a tabby coat. Agouti provides camouflage, helping the cat blend in to nature. The tabby stripes also provide a disruptive camouflage, masking the individual form. Among smaller cats, both striped or spotted patterns occur, superimposed over the agouti.

The blotched or classic tabby (mackerel) are very handsome cats, especially the short-hairs with good dense black markings, in contrast with the rich brown undercoat.

Cat fancy organizations publish elaborate descriptions of the ideal for which breeders aim. These can specify the exact pattern the cat’s coat should have.

The Abyssinian, classified as a breed with a distinct body type, is still a form of tabby. Abyssinians have tabby markings on the face; sometimes they are also found faintly on legs and tail. Selective breeding of these animals has brought about a rich, warm brown coloring.

Some breeders believe that a further mutation of the tabby gene is responsible for the spotted pattern seen in the Egyptian Mau, spotted Oriental shorthair, and the Ocicat.

Though the basic tabby is genetically black, selection has developed the ground color as rich brown rather 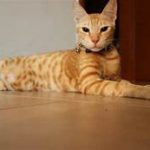 than grey. All orange cats are in fact tabbies. In the red tabby, the markings are encouraged.

Tabbies can be bred in all colors and offer a bewildering array of different markings. For example, the Egyptian Mau, considered a spotted tabby breed, can be found in several color variations.

One very stunning purebred tabby is the silver Mau. This cat has jet-black markings on a silver-white ground color. I would love to have one of those!

It is interesting that breeders have managed to isolate a gene responsible for each variation in the coloring of the tabby. By careful breeding, it is possible to predict what the coat will look like.

The English word “tabby” originated from a French phrase. The translation has the meaning of “striped silk taffeta.” The root of this word, “tabio,” means rich watered silk. The name, “tabby,” began being used in the 1690s and means “one with a striped coat.” 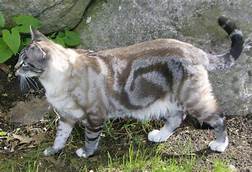 Tabbies are social cats who adjust well to our lifestyle. In general, these cats are more loving and affectionate than other cats. The tabby may choose a favorite among its human family. It is a playful cat. You can play games with your tabby, or it may enjoy playing with other pets in the house. These cats are good with children.

Though the tabby is easy-going, he does have his preferences. The way the cat is brought up will affect his personality, for better or for worse. He can display a wide range of emotions, including sadness, anger, and depression.

These cats like to scratch furniture, so give them several scratching posts.

Just like a human fingerprint, every cat has a unique pattern on its nose pad. The pad is ridged with a pattern that is unique to that animal.

If his diet is good and the cat gets adequate exercise, he can live for 15-20 years, and sometimes longer.

Besides the “M” on the forehead, many of these cats come with a long strip of color that resembles eyeliner, placed on his cheek. The “M” is one of the most consistent markings of a tabby. There are several stories as to the meaning of that letter:

1. Named for the Mau, the name for cats in ancient Egypt. 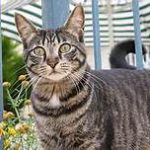 2. Named after Mohammed, who treasured cats.

3. Named after the Virgin Mary. There is a story that a tabby cat lay next to the baby Jesus, and Mary stroked an “M” on its forehead in gratitude.

4. Named for a brown tabby cat, beloved of Bast.

What a fine cat! If you are owned by a tabby, you are fortunate, as this cat’s ancestry goes back to the first cats. Treat that fine creature well.

This information came from three sources. The first was my favorite reference, The Book of the Cat. Other sources include Wikipedia and Layfly.com.

4 thoughts on “Do You Know the Tabby Cat Characteristics?”