If you visit the Cycladic Islands of Greece, you will find several lovely, whitewashed villages. The warm climate there allows islanders to spend a great deal of their life outdoors.

IT’S A CAT’S LIFE IN THESE GREEK VILLAGES

In these villages live many cats. Though these cats are forbidden to cross the threshold of the house, they are truly domesticated. They are not abandoned or wild, and have shared the lives of humans in these island villages for centuries. The 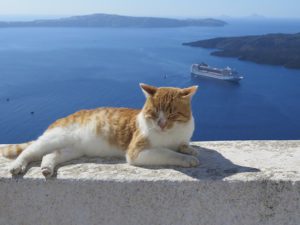 Greek islanders care for the cats, feed them, and accept them as part of village existence. The cats have always been there, like the wind, sun, or the sea.

HAVE YOU SEEN ANY HANS SILVESTER PHOTOGRAPHY?

The book, “Cats in the Sun”, was put together by acclaimed photographer, Hans Silvester. He spent more than three years traveling the Greek villages in the Cycladic Islands, collecting these samples of cool cat photography. This volume is part a photography book and part a travel book, and is certainly a book that is all about cats. Open the cover and view the astounding full-page pictures that await you. You may feel a desire to go to these islands and sit in the sun with the cats.

There are ten islands in the Cycladic group. They are Mykonos, Milos, Santorin, Tinos, Syros, Amargos, Folegandros, Sifnos, Paros, and Naxos. On all of these

islands, you will encounter a large population of cats. Their Greek caretakers make sure they are well-fed.

The reason the islanders take such good care of their cats is the same reason cats were originally tamed and domesticated by the ancient Egyptians. The cats are expected to work for their keep. They are the protectors of food sources, especially seed corn, from the inroads of hungry rodents. An ordinary village cat can easily kill up to 300 mice a year. Considering how fast mice reproduce, it is easy to see why the cats are such powerful allies.

Females are better hunters than males, possibly because they have young to nourish with milk or to teach about mice and hunting. These cats are also good at 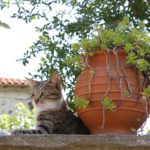 dealing with young rats, though a full-grown one could be a problem.

THE IMPORTANCE OF CATS IN HISTORY

On the old sailing ships, cats were always important members of the crew. Cargoes of supplies were quite susceptible to mice infestation. To protect their supplies, 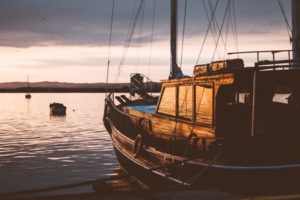 sailors kept cats in the holds of the ship. Silvester says, “Cats were as much a part of the equipment as the anchor, the sails, and the compass. In fact, (in those days) it was impossible to register or insure a ship that had no cat aboard.”

Silvester gives an example of how important cats were aboard these ships. In the Battle of Agincourt in 1415, while the English kept their weapons in stores patrolled by cats, the unguarded gut cords of the French crossbows were gnawed through by rats.

When Pizarro battled against the Incas, his horses would have starved if cats had not protected their oats. With his hunting skills, the cat has played a role in shaping world history.

A DIFFERENT KIND OF KITTY EXISTENCE

The cats in the Greek islands lead very different lives. Each cat has his or her own territory. Every morning the toms go for a stroll and mark the boundaries of their district with a spray of urine. Within their home turf, they know all the houses, gardens and trees, rooftops, and hiding places. They know the inhabitants, whether animal or human. They know how to behave toward each dog in their area. Neither do people hold any mystery. The cats know the rhythm of village life. They know which house puts out leftovers or when the fishermen return to port. 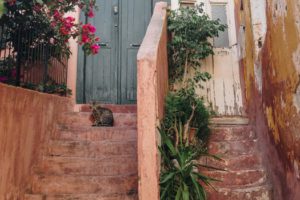 They know the personalities of the humans they interact with as well, and understand intuitively which people are friends and which don’t like them. Any slight change in their world will catch their attention. A new smell might make them curious as to the cause. They wake at any unexpected sound.

A LOOK AT CAT HUNTING SKILLS

When a rodent appears on the scene, the cat freezes and waits with amazing patience. When the moment is right, they pounce, and once they catch their prey, they might start a “catch and retrieve” game. My cat, Carlos, initiated such a game when we first moved to Gustavus. When he caught one of the plentiful voles or shrews, he would toss the victim as high as possible before dropping it. As with the Greek cats, once the poor critter hit the ground, he would grab it again, and bat at it with his paws to try to get it to run once more. The victim would finally escape into death, leaving the cat with an immobile playmate.

THE PLACE OF TERRITORY IN THE CAT WORLD

Within their territory, the cats know their neighbors very well. Those on the perimeter of this territory might be smarter not to venture onto a neighbor’s turf, as it might lead 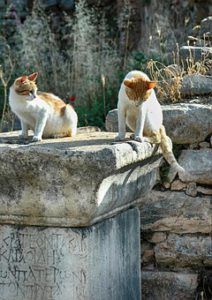 to being ejected immediately.

The dogs in these Greek villages have learned to be cautious, and tend to lurk in hiding places that allow them to see without being seen. They had best hope they don’t meet a female cat with kittens, as she will make a swift, sudden, and fearless attack, causing the foe to turn tail and run in terror.

There are two kinds of kitty citizens within the villages. One kind is the privileged individual who actually belongs to someone. These cats, though not allowed inside the house, “own” the doorstep, and they are regularly fed. Their living conditions are 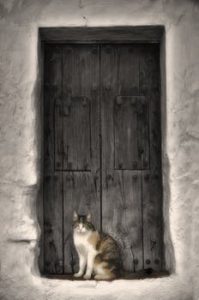 a bit better than the cats who don’t fit in.

Silvester calls this second group “tramps by temperament.” They ignore boundary rules, though in fights they always lose to the more established cat citizens. These tramp cats are the ones seen first when arriving in the village. They may be near the dustbins, or the restaurant terrace, or patrolling the harbor. Their diet is an irregular one of feast or famine. Meals are poorer in quality. These cats often die young.

Because of their strong sense of individuality, cats do not accept a rigid organization, and do not form packs or groups.

Cats sleep much more than we do, with a different rhythm to their daily lives. Their sleeping is more a series of naps. These naps, between a dreamy doze and deep sleep, suit them very well. In fact, no other animal has developed napping to such a fine art. Without these naps, cats could not survive. They alternate between sleep and wakefulness, through the day and the night. Because of their great night vision, they can see as well at night as they can in the daytime.

Cats don’t appreciate a building that looks like a big box. They are more attuned to free-form architecture. They love level changes, curves, angles, and mixed materials, so these white Greek villages suit them perfectly. The animals live as much on the flat roof as on the ground. They use balconies like springboards, jumping across narrow streets. They have a collection of favorite hiding places in their memory banks, where they can observe the world from a safe spot.

Living in harmony with their environment and enjoying life’s pleasures brings these animals a great quality of life. These are very happy cats.

OWN YOUR OWN BOOK OF COOL CAT PHOTOGRAPHY

If you would like to have your own copy of this fabulous book of cool cat photography, you can o

rder it right here. Select either a soft-cover copy or a hard-cover edition.

Please note:  As an Amazon affiliate, I receive a small commission on qualifying purchases.

4 thoughts on “Are You a Fan of Cool Cat Photography?”