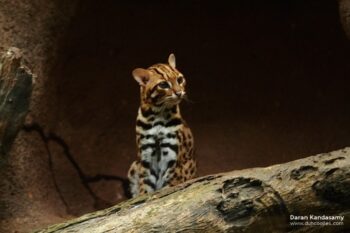 Have you ever become acquainted with or shared a home with a Bengal cat? If so, you probably know the breed began from a cross between a leopard cat and a domestic cat. Read on to learn some Asian leopard cat facts.

This cat, a small wildcat native to Asia, will have a slightly larger size than most domestic cats. The cat has long hind legs and a muscular frame, with well-defined webs between his toes.

His Size Can Vary

The Asian leopard cat’s size can vary quite a bit depending on the region where it lives, as scientists have identified 20 documented subspecies of this cat.

If the cat comes from Southeast Asia, (Prionailurus bengalensis) he will be smaller, and will rarely weigh more than 10 pounds, even as an adult cat.

The Asian leopard cats found in Northern Asia (P. euptilura) will weigh out about the same as domestic Bengals. However, this wildcat is almost ten inches longer than a domestic Bengal.

The Wild Leopard Cat Does Not Domesticate Well

A wild leopard cat usually retains his wild nature and does not do well as a domestic cat. Breeders today no longer need a wild leopard cat to continue the Bengal breed. Thus, the modern Bengal has the separation of generations from its wild past.

Now, the Convention of International Trade in Endangered Species of Wild Flora and Fauna has classified the leopard cat as endangered. Therefore, you could find that local, state, and international restrictions may come into play, and such ownership would not be allowed.

Best to enjoy a domestic Bengal who still looks like his wild counterpart, but has an affectionate, people-friendly personality.

In the wild, these cats come in as definitely nocturnal, as they prove most active at night. As well as on the ground, they can hunt in trees or even in water. Does your Bengal like the bathtub? If so, it probably dates back to his ancestry.

Being carnivorous, they typically eat small rodents, lizards, amphibians, and birds. Their most common food sources include mice and rats, and they also eat eggs, fish, chickens, and insects, depending on the habitat.

Many of them really love chicken in their diet, which has not won them many friends among the human population.

To me, “main threats” sounds more like multiple threats. With so many reasons why the leopard cat population shrinks, no wonder they have ended up on the endangered list!

These cats can survive and even thrive in a variety of habitats. They adapt their behavior to their living environment.

Part of their habitat choice, which ranges from rain forest to coastal areas, depends on their specific leopard cat subspecies.

As to location, the leopard cat has a widespread area where he lives, appearing in 21 Asian countries, which has granted him the distinction as the most widespread of all small Asian felines. His many names arises from the fact that, depending on location and habitat, coloration and size varies.

The cat resides in a number of South Asian countries, including these:

In the northeastern part of Asia, the cat roams around Korea and the Amur basin of the former Soviet Union.

Western locations include Bangladesh, Assam, the foothills of Himalaya to Jammu and Kashmir, and then north to Pakistan.

Forested regions in eastern India provide it another home. The cat can also appear on the Indian peninsula in western Ghats to Coorg in the far south. He is also widespread in China.

In the far eastern part of Russia, this cat’s name becomes the “Amur forest cat.”

The leopard cat, as you can see, lives in a very large area, which accounts for size and coloration variations. The cat takes on a camouflage that allows him to adapt to his chosen habitat.

The leopard cats, just as our domestic cats, are quite territorial. They will mark their turf by urinating. When they choose their territory, they like a spot that has both trees and water. In these habitats, they undoubtedly find a wider range of available food.

Males and females may share part of the same territory and will mate with each other. Mother cats, scientists find, prefer to give birth and raise their kittens in a forested area. Here, they can find protected areas for their dens.

The male can give a paw to help out. “Dad” might serve as a secondary caregiver.

Leopard cats do not have a social group, however. They live alone, except during the breeding season. This season varies, depending on climate. If they live in a tropical area, kittens might come along at any time throughout the year. Further north, in colder climates, females give birth in spring.

The gestation period lasts 60 to 70 days. Litter size will vary, though usually the mother has two to three kittens.

Long Hunted For Their Coats

Now commercial trade has been much reduced, but the leopard cat continues to be hunted throughout most of its range for fur, food, and pet sales. Since the cat has come to be viewed as a poultry thief, many kill it for this reason.

Fossil remains of the leopard cat turned up in excavations of Neolithic villages in central China in 200l. Radiometric dating showed the bones to have an age of at least 5,000 years old. Finding these remains indicates that the leopard cat had been domesticated in Neolithic China.

The lovely Bengal cat represents a cross-breed between a leopard cat and a domestic cat. The cat made its way into cat shows in the 1970s. The 5th generation hybrid is usually authorized for keeping without a special license.

Confusion Regarding Number Of Species

The reason for the confusion regarding the number of species of this cat comes about because they live in such a huge range of habitats. Their coloration has become varied to protect them better in their chosen habitat. These differences caused confusion for some time until investigators realized that the color variations occurred due to habitat.

As to lifespan, the Asian leopard cat usually lives from eight to twelve years in their native habitat, and ten to thirteen years in captivity. This lifespan is not as long as that of a domestic cat. However, the Bengal cat lives from twelve to sixteen years, so your Bengal will be around about four years longer than would his wild relative.

Though this cat may only get as big as an ordinary house cat, he has the spirit of a tiger. From the Asian leopard cat comes the gift of the Bengal, one of the most beautiful and playful cat breeds in the world.