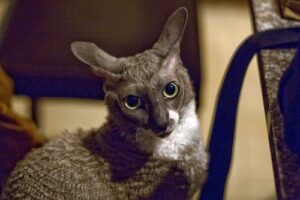 Are you familiar with the curly-coated Cornish and Devon Rex cats?  These cats come from two distinct rex cat breeds even though they look quite similar.

The cats have been appearing in cat shows in Europe since the 1950s.  Soon after they also appeared in shows in North America.  They both developed from a mutation.

The Cornish Rex originated in Cornwall, England, in 1950.  It has a curly, plush coat, a moderately

The Devon Rex originated, also from a mutation, in neighboring Devon.  Its coat is short and wavy.  The body-type is also a pronounced foreign-type body with a unique pixie-like head shape  It’s nose is quite short, whisker-pads are prominent, and ears are huge.

Since these two mutations are unique, when the two types of rexes are bred, the kittens have straight coats.  Therefore, breeders decided in the early 1960s to breed them selectively along different lines to make the two types more easily distinguishable.

Though similar mutations have also occurred elsewhere, none have been established as viable breeds except for the German Rex.  This cat has since been proven to be genetically identical  to the Cornish Rex.

Though breeders have tried producing a long-haired rex, they have been generally considered as unattractive, as their coats appear lank and sparse.  Overall, they had a rather ragged appearance.

The first know rex cat was actually the German Rex, being a feral hospital cat in East Berlin in 1946.  Then in 1951, the first Cornish Rex was born to a farm cat.  This kitten received the grand name of Kallibunker.

The cat’s owner contacted a well-known breeder with an interest in genetics.  They back-crossed the cats, producing more rex kittens.  The mutation has proved to be recessive, and was named after the similar mutation in the rabbit.

Then, in 1957, two descendants of Kallibunker were sent to the United States so the rex breed could be started there.

Meanwhile, in 1960, a curly-coated feral cat was observed living next to a disused tin mine near Buckfastleigh, Devon.  A nearby resident cared for a young tortie stray, who mated with this cat and produced a curly-coated kitten.

To the breeder’s surprise, no curly kittens resulted from several matings.  They then realized that

the two lines represented unrelated mutations.  These would have to be established by separate breeding programs.

As several litters of cross-bred kittens had been born, test matings now had to be carried out to discover which rex genes each cat carried.

At this point it was decided to selectively breed towards two different body types.  The unique head shape of the Devon was based on that of Kirlee.

In  1960, a German Rex came to the United States, and two more were sent soon after.  Though they were said to resemble the Devon Rex in body build, their two separate litters born in the United States in 1970 were of curly kittens.

As these two litters came from German-Cornish crosses and resulted in curly kittens, it was proved that the mutations were the same.

Both the Cornish and the Devon Rexes are bred in a great range of colors.  In Britain, the show standard states that a Cornish can be any color, and the Devon, any color except bicolors.

Both breeds of rexes are intelligent, extroverted, and affectionate pets.  Since they do not constantly shed hair, they are easy to groom.  Normally, all you need to do is hand-groom the cat:  firm

stroking the fur, neck to tail.  You can use a comb to advantage once a week.

Because of the rex’s fine coat, lacking in guard hairs, it is not so well-protected against changes in temperature.  They should not be allowed out in extreme weather.

It is also recommended to keep up the cat’s body heat by giving them a diet rich in fats.  You can use shredded suet, adding a dessert spoonful each day to adult cats’ food, and a teaspoon a day to kittens.

The rex female is an ideal mother.  Average litter size is three to six kittens.  These kittens are very active from an early age.  They also soon show the great inquisitiveness that is a characteristic of the breed.

Perhaps you want to add one of these unusual cats to your household.  They make good pets, and may be a delightful addition to your family.

If you would like to have a good reference for information on cats, including breeds as well as many other articles of interest regarding your cat and its well-being, I’m offering you two book choices, both available from Amazon.  Please note that, as an Amazon affiliate, if you purchase either of these books, I will receive a small commission.

The first one has been my go-to book about cats and their health for several years.  It is called “The Book of the Cat.” Below is the link.  Just click on the image or the blue-highlighted title, and you will be taken to the page where you can purchase this book.

The Book of the Cat

This second book is called “The Encyclopedia of the Cat,” and has breeds plus much more information.  There are over 1,000 pictures.