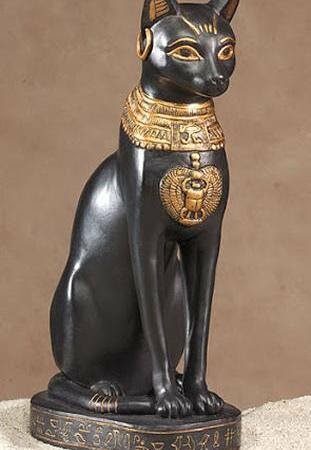 Who were these ancient Egyptian goddesses? What parts did they play in the lore of ancient Egypt? Were they one god or two? Sorting out the truth can become confusing.

Both daughters of Ra, the Sun God, these two played their parts in the Egyptian history of gods and

goddesses. Though they had separate histories of their exploits, they eventually became characterized as two aspects of the same goddess.

Two Aspects Of One Goddess

While Bast had a cat’s head and the body of a human, Sekhmet had the head of a lion and a human body. Thus, their appearances coincided with their personality traits — peaceful or war-like. Though opposites, they complemented each other.

Bast originally appeared as a lioness goddess, but later became more closely associated with the

house cat. In fact, the cat became known as her totem animal.

She had many attributes and aspects:

As Bast first became depicted with the head of a lion, she could be transformed into Sekhmet, goddess of war for Upper Egypt. Both goddesses remained closely connected to the Sun God, Ra. Sekhmet, not having Bastet’s softer qualities, became known as fierce and wrathful.

Sekhmet’s name comes from the Egyptian word “sekhem,” which means “power” or “might.” This lion-headed woman often has a sun disk on her head. Seated statues of her show her holding the ankh of life, but standing, she usually holds a scepter formed from papyrus.

According to myth, Ra became angry because mankind did not follow his laws meant to bring justice and balance, so he sent Sekhmet, the “eye of Ra,” to earth in the form of a lion.

Sekhmet’s rampage against man caused the fields to run red with blood. Ra, not a cruel deity, saw the carnage and wished to stop it. He ordered Sekhmet to stop, but because of her blood-lust, she would not listen.

Ra asked Thoth, the god of wisdom, to stop her. Thoth ordered that red barley be made into beer; to this mix he added pomegranate juice and magical ingredients. Sekhmet, mistaking the mixture for blood, lapped it up. Then, her heart soothed, she lay down and purred, having been transformed into gentle, loving Bast.

When she awoke, the first thing she saw was Ptah, the god of architecture and craftsmanship. She immediately fell in love with him, and became his wife.

Two Become One Through Balancing Opposites

These two goddesses contain balancing opposites within themselves. Together, they form two aspects of the same divine feminine as opposites: light and dark; night and day; yin and yang.

Like us, they represent a balanced whole of conscious and unconscious elements, which appear within each of us. Sekhmet and Bast represent both the divine archetype that punishes and rewards and the feminine archetype given to nurturing and protecting.

Looked at individually, they encompass the light and dark within themselves. These outwardly

appear as only one dominant trait, contrary to the others. Yet the two remain the same, and are not really opposites at all.

Sekhmet, goddess of flame and warrior goddess of upper Egypt, acted as the destroyer of the enemies of her father, the Sun God Ra. Her fierceness and otherworldly powers became the focus of celebrations meant to appease her and avoid her terrible wrath.

She could either cast plagues against those who angered her, or, for those in her good graces, she could avert plagues and cure disease. Strange as it may seem, though she became known as the lady of terror, she could also be cast in the role of “lady of life.”

Originally also shown as a lioness goddess, Bastet became more commonly associated with the house cat. She frequently is shown holding a sistrum, a musical instrument of the period.

Images of Bastet, often carved of alabaster, commonly used for perfume and ointment jars, fitted well with one of the meanings of the name, Bastet, as “she of the ointment jar.”

Bast saw cats as sacred, so they became trusted pets in many Egyptian households. From the killers of vermin, they evolved into loved and trusted companions. In wealthy homes, they wore gold jewelry and ate lushly from the owner’s table. People deeply mourned their passing, had the cat

mummified, and dedicated it to Bastet.

You couldn’t kill a cat in ancient Egypt, and even if it occurred by accident, you still paid the penalty — death.

Several famous myths about Bast emerged. One important one revolved around the killing of Apep, an underworld serpent god associated with darkness and chaos. Apep was Ra’s greatest enemy, wishing to consume everything with darkness and to destroy the god. Bast, in her cat form, went to Apep’s lair at night and killed him.

In legends, Sekhmet became known as the “Powerful One, protector of the Pharaohs. She had a bravery and style, and her armor included aggression and courage. A fierce warrior, she also became known for divine retribution, destruction, and conquest.

Let Us Drink To Your Honor

To honor the gods, the Egyptians held an annual festival of intoxication. They drank beer, mimicking the drunkenness of a goddess who had once stopped her wrath and saved mankind from destruction by drinking the red beer she thought was blood.

To please this goddess and calm her wrath, believers performed rituals before a different statue of

the goddess each day of the year. The result: many statues of her can be found in Egypt. At one time the Temple of Amenhotep II, one of the largest of the era, covering approximately 86 acres, contained 700 statues of her.

Sekhmet, on all the statues, wears a tripartite wig, which divided the hair into 3 parts, two in front and one in back. She has on a long body-skimming dress.

Both of these goddesses deal with female empowerment. They teach us to empower ourselves; to grow our strength, and gain the inner drive and determination to see things through.

Perhaps we might find it worthwhile to bring these two goddesses back to life, as uplifters of the female spirit. They were healing entities and protectors to all who believed in them.

6 thoughts on “Learn About Bast And Sekhmet, Ancient Egyptian Goddesses”