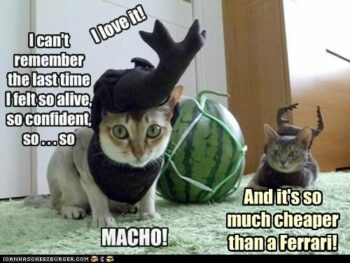 Of course, you see the great difference in the size of a cat and that of a person. The small cat does not have room in his fuzzy head for a brain as large as ours, so he has one that fits. However, a very interesting fact: The cat’s brain structure is about 90% similar to ours.

The surface folding and structure mimics that of our brain. Both cat brains and human brains have similar lobes in the cerebral cortex. So, of course, the cat has the capacity to remember, though in altered ways compared to what we remember.

Cats and people use memory to store information in the brain that can be retrieved as needed. A cat uses memory to recall things that are important to him, such as where and when he gets fed.

How Does Cat Memory Work?

Cats possess both short-term and long-term memory. Of course, their specific memories will depend on their experience, needs, and emotions. They hold on to memories of things that are important to them. These include where and when they’re fed, safety, and socially interacting.

An older cat can develop feline cognitive dysfunction, a condition somewhat similar to our Alzheimer’s. They can suffer from memory loss, even forgetting vital information, like where their food bowl lives.

What Types Of Memory Does A Cat Have?

A cat has a decent memory, something that has been well-researched in recent years. As with us, he has various types of memory.

Humans demonstrate this kind of memory when they remember someone’s phone number long enough to dial it.

Cats use short-term memory to advantage for solving any kind of problem. They might remember where they found prey, and whether they have already checked out a particular spot that night. They also remember the time of day they were successful in the past, and return to that spot at the same time.

In 2006, Animal Cognition published a study showing that cats had a very limited short-term memory when it came to finding a hidden object. Though declining rapidly within seconds, the memory did persist for up to one minute.

Later studies that involved leg movements and obstacle avoidance, it was found that sometimes the cat’s short-term memory could last more than 24 hours.

If experiments were repeated, they seemed to trigger even longer lasting memories. One researcher explained that it cements the memory.

What Are Long-Term Memories For Cats?

Though cats do not recognize human faces as well as dogs, if the cat has a prolonged and direct interaction with someone, he becomes more likely to remember that person.

Long-term memories in cats can be split into categories:

How Are Cat Memories Formed?

There are two ways in which a cat can form memories. The first one focuses on a memory that is made because it becomes triggered by something highly important to your kitty.This could include food, water, grooming, hunting, sleep, play and bonded companions.

This type of memory helps kitty remember where to find the litter box and what time and place dinner gets served. It’s also why kitty remembers family members.

The second way these memories become triggered has to do with emotions, such as fear or happiness. Some event in their life will cause an association with either a negative or a positive experience.

Due to long-term memory, a cat might hold a grudge. Or, kitty may wait for you when he wants a snuggle with you in your favorite chair.

Are Some Memories Life-Long?

Here’s an example from a story on Petful.com. A gaunt ginger cat wandered in a parking lot next to a veterinary hospital, and is picked up by the staff.

This cat, whom they name Billy, has Stage 2 kidney failure, but thanks to efforts by the staff, he grows much stronger, and becomes the office cat.

A few years later, a man and his daughter come into the office, while Billy lounges by the reception desk. They are struck by how much the cat resembles their cat, Tuffo, whom they lost during a move several years earlier.

Billy becomes so excited he jumps over the desk to get to them. Later in the afternoon they return, bringing Cotone, their cat, with them. Billy, named Tuffo by his family, and Cotone immediately recognize each other. Tuffo returns to his family, and he and his brother are again inseparable.

The internet has many stories about such reunions, demonstrating that a cat’s long-term memory works quite well. Depending on the memories, the cat may show a preference for or a dislike of certain people based on past experience.

Long-Term Memories Can Be Positive Or Negative

Your kitty might remember the person who gave good scratches and pets. If he is leash trained, he could well remember the good-smelling outside world.

Kittens will become better prepared for living with people if they are “imprinted” when they are young, a process of handling kittens during the early stages of their life so they become used to people. This impriting helps with the bonding process.

The good memories your kitty has will remain stored in his brain until some circumstance causes him to recall them. Then he will find them pleasant. For example, he may realize that when you come home from the store, you bring good food. That’s a pleasant memory.

It’s not just positive events that cats remember, but painful events as well. For example, you might notice that your cat becomes tense when taken to the vet. He remembers the carrier and the unpleasant place with dogs barking and vets who do unwanted things to him.

Your cat can also remember someone whom he dislikes because of the way that person has treated him in the past. It’s all stored in kitty’s brain.

He will also grieve, either the deaths of other cats or humans. He may lose his appetite, miss the litter box, and develop a bad attitude toward his humans. Be kind to him, and give him extra love and attention. Help him through his grief.

Into any cat’s life some rain must fall. You can help keep kitty in the sunshine by joining with him to create some good memories together. Observe him and marvel at the way his mind works. He is a most remarkable creature, providing laughter and love.

4 thoughts on “Have You Ever Wondered, Do Cats Have A Good Memory?”