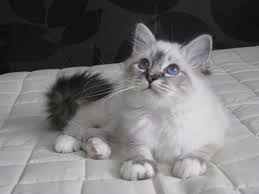 The Birman, which is known as the sacred cat of Burma, is a very handsome cat. It has the mask and coloring of a seal point Siamese, but with long fur and four white feet.

Its fur is not as long as a Himalayan’s, but it is silky and more like that of the Angora. Its body is low on the legs and longer than a Persian’s. Eyes are deep sapphire blue, and the tail is bushy.

A charming legend about its origin goes as follows: Before the time of Buddha, the Khmer people built temples to honor their gods. One of these, the Temple of Lao-Tsun, held a sapphire-eyed golden statue of the goddess Tsun-Kyan-Kae. It also had 100 pure white cats.

One of these cats was named Sinh, and was companion to an old priest, Mun-Ha. One night, Thai raiders attacked the temple. They killed Mun-Ha as he knelt in prayer before the figure of the goddess. The cat, Sinh, immediately jumped on the body of its master and faced the goddess.

The priest’s soul entered the cat, and when this occurred, the white hair on the cat became shaded with gold and its eyes became sapphire-blue. Its legs turned brown, but the feet which rested on its master remained white. 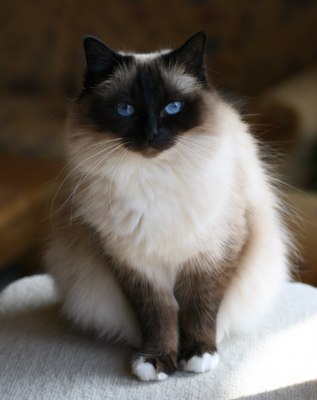 The raiders were driven off, but seven days later Sinh died, carrying Mun-Ha’s soul into paradise. The morning after the raid, all the other white cats went through the same transformation. From then on, the cats were considered sacred, as they were believed to have custody of the priests’ souls.

A pair of these cats were sent to France as a gift from the priests of a new temple of Lao-Tsun in Tibet. The male died on the journey, but the female, already pregnant, survived and became the founder of the European line of pedigreed Birmans.

In 1960, a pair of these Tibetan temple kittens were given to someone in North America. They had the same color as the Birman, and the same legend traveled with them.

The French, however, claim that the breed was produced in France by matings of Siamese and long-haired black and white cats.

Personally, I like the temple cat legend better. It’s a most appealing story.

The Birman breed became very successful in France until World War II, when the war decimated the feline population. After the war, only two Birman cats remained, and it took a long time for the line to recover fully.

Birmans went to England from France in the early 1960s, and in 1966 were accepted for championship competition. There are now Birmans with other point colorings; however, purists claim that only the blue- and seal-point colors are truly Birman.

One of my references pictures and mentions the Snow Shoe cat, said to be a rarity in North America and non-existent elsewhere. This cat has the seal point coloring and a short coat, but also the four white feet. By accident, I acquired two of these Snow Shoe cats.

When I lived on Spruce Island here in Alaska, a black stray female from the village of Ouzinkie had a litter, and the cats were fed by a woman whose husband worked on a construction project in the village. When those folks left, the cats had to fend for themselves. The mother cat had one black kitten and two females who looked like Siamese but had four white feet and also a white chin.

I decided to capture them. When I went to find them, the mother cat and the black kitten had disappeared. Only the two very hungry Siamese-looking kittens remained. Since I brought food in a box, they finally entered into the container to eat. Quickly I closed the lid and took them home. They lived out their lives with me at my homestead.

The Birman temperament lies somewhere between the placid Persian and the high-strung Siamese. Precocious cats, they are often ready to mate as early as seven months. Their litters are usually three to five kittens, all born almost white. Within a few days, the points begin to show.

By the mid-1920s, the breed had become well-established in France, and was recognized as a breed in 1925; also a bit later in Germany. The first Birmans to arrive in the United States came from France in 1959. Then, an American diplomat brought two cats from Cambodia. These two came from a Tibetan temple and carried the Birman legend with them.

The Birman’s long hair is silky, and does not mat or tangle. They often have a thick, heavy ruff at the neck, more pronounced in American-bred members of the breed.

Their tail is medium-long and bushy, often displayed as a plume. This cat has a broad, rounded head, and a flat area in front of the ears, which are spaced well-apart, wide, and rounded at the tips.

The Birman has a Roman nose and full cheeks. Eyes are almost almond shape; always sapphire-blue.

Points are confined to face, ears, legs, and tail, and the white “socks” on the feet should be symmetrical.

The original coloring of this breed is the seal point, the standard Siamese-type patterns except for the four white feet. Much prized is the feature, especially distinct in adult males, of a faint golden “halo” over the entire back.

Blue, chocolate, and lilac (lavender) points are also fully recognized both in North America and 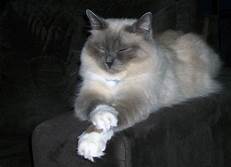 Britain. The British also recognize tabby, tortie, and tortoise-tabby coloring, though some say the only true Birmans are those with seal or blue point coloring.

These beautiful cats are quiet, placid, and gentle, and have a great deal of dignity. They are easy-going, which makes them good show cats, as they won’t become freaked by the show atmosphere.

They like people and enjoy their company. They get along well with other pets. They are not great hunters and often are not interested in going outside. Still, they like plenty of space — no cage for them! Such confinement does not go over well.

They need regular brushing and combing, but their coats are easy to care for.

I used two references for this post. They are as follows:

The Book of the Cat, by Michael Wright and Sally Walters

The Encyclopedia of the Cat, by Michael Pollard

by Barnes and Noble

Just click on the image or the blue-highlighted title and you will be taken to Amazon to order.  Please note that, as an Amazon associate, I will receive a small commission for your purchase.