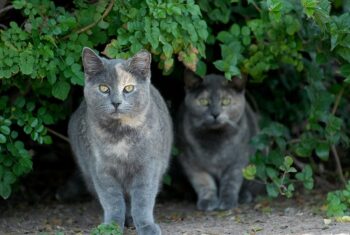 Though it is true that we normally see cats singly or perhaps with one or two others, if we own more than one, then what kind of social life do they have? Are cats social creatures? They often seem to prefer their own company, and this is especially true when they are hunting.

Cats do not hunt in packs, except for the lion, which does so as part of his group. Cats hunt for themselves.

Feral cats, however, tend to be more group-oriented. Female feral cats often live in mutually supportive groups of queens and kittens. These animals sleep and play together, groom each other, and unite in defense of their chosen territory. 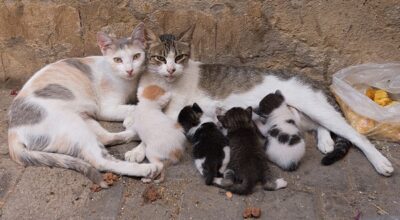 These feral females occupy a fairly small range. The area contains individual feeding and sleeping places. The territory can also overlap that of other females. This overlap becomes common ground where they can make social contact with others.

A tom’s territory is typically 10 times the size of the females, and may include a number of female ranges.

Queens raise their kittens as single parents. After mating, the female either drives the tom away or he wanders off. The queen deals with her pregnancy and birthing on her own.

Six or seven weeks into her pregnancy, the queen begins to look for a suitable private place to have her kittens. It needs to be warm, sheltered, and quiet. She may reject several choices before making up her kitty mind.

The gestation period for cats is about nine weeks. Because the newborn kittens are very vulnerable as prey, the mother does not want to leave them for more than a few minutes.

As each kitten is born, the mother cleans it and eats the sac in which it is born, as well as the umbilical cord and the placenta.

Over the next few weeks, the mother  devotes herself to feeding, caring for and training her litter.

Once the queen has recovered her strength after birth, she may decide to move her family to quarters that are new and clean.

The Cycle Repeats Itself

Thus, for feral cats, the basic family unit is made up of mother and kittens. At the early age of six 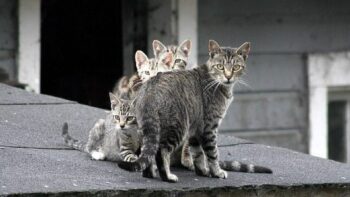 months, the kittens are sexually mature and go off seeking mates, beginning the cycle again.

Young toms find them, as they begin a wide-range search, seeking females. Young females stay closer to home, in their own ranges.

However, both males and females become involved as part of the social structure of their respective territories. This social structure is based partly on their competition for mates and food.

There is a female hierarchy that is based on the number of litters each queen has had. The dominant female is usually the oldest cat still sexually active.

In each social group there are some females from the same litter. They have maintained contact since birth. This behavior helps make the group cohesive.

At the time of birth, the birthing queen is given a kind of temporary seniority. Once the kittens are weaned, she takes her place in the social order.

Sometimes another queen with a litter helps clean newborn kittens and takes part in their care and training, and brings food to them.

It’s harder for a feral tom who is going out into the world. He must fight his way into a territory, and 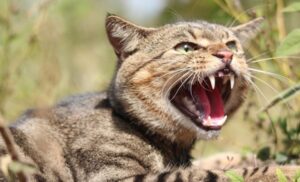 takes on a number of challenges. These can be spectacular fights that can often be damaging to one or both combatants.

Once the new tom’s place in the hierarchy is established, he may still face future fights if he wants to improve his status. He may also choose to challenge a rival for the chance to mate with a particular queen.

When Is The Season For Mating?

The queen’s season in heat can occur as few as two or three times a year, or sometimes as many as 10 or more. Her female sex hormones cause her to stretch and tread, movements known as lordosis, and frequent calling.

These signals generally bring the toms, who gather close, spraying urine, marking with their scent, and giving courtship cries. They fight among themselves for the right to claim the queen. However, she makes the final choice, and female cats apparently have their own ideas or tastes that observers cannot understand.

The dominant queen or tom, being the head of the hierarchy, gains the rights to the most desirable sleeping places, the best birthing places, and the choicest hunting areas. Once these matters are resolved, the cats settle into relative peace and friendliness until another intruder comes along.

What About Neutered Or Spayed Cats?

Feral cats’ social structure revolves around sexual activity. Neutered or spayed outsiders are not allowed in the group. Therefore, a neutered domestic cat has no chance of finding a place in the community. This poor cat is condemned to a solitary existence and a lot of harassment.

Often domestic cats who are let out at night can exhibit a modified form of social life. Groups of cats 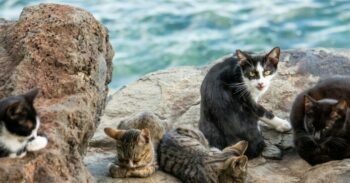 gather at a convenient spot, such as a flat roof. Then they will spend the night together, purring, grooming, or merely silently observing.

Then, after enjoying each others company for the evening, toward night’s end they will disburse to their own territories.

Similar behavior can be seen in animal sanctuaries, or such places as shelters, where numbers of cats occupy a large enclosed space.

Also, sometimes there are urban feral colonies that are found in such places as hospital grounds, railway sidings, and churchyards. Here, they need some personal space around them, yet they are close enough for loose social contact.

Friendship With Other Species

Sometimes domestic cats modify their behavior by befriending dogs or other pets in the household. They might take part in some mutual grooming. They might sleep close together for warmth, or even play together.

The cat greets this friend of a different species with tail erect, just as when two friendly cats meet. An unusual friendship can also often occur between a horse and a cat. They are all part of the family. 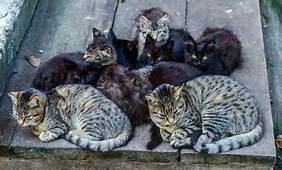 Though their way of socializing may seem unusual to us, they are indeed social animals, and demonstrate their ways of interacting to those who observe them carefully.

Information for this post comes from “The Encyclopedia of the Cat,” by Michael Pollard. If you would like your own copy of this fine book, click on the Amazon image or blue-highlighted title below, and you will be taken to the page where you can order. Please note that I will receive a small commission if you purchase.

4 thoughts on “Are Cats Social Creatures?”